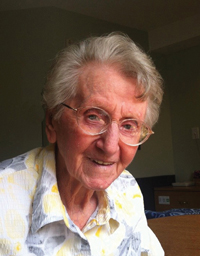 Quietly and peacefully she left our world and passed into the arms of God on Saturday, November 2, 2019 at the age of 100 years. Esther was the youngest of 10 children born to Fredrich & Susanna Wildeman. She was born in Esk, Saskatchewan on June 4, 1919. The baby of the family was spoiled accordingly by her Dad, her brothers & sisters. She was bit of a tomboy and inheriting the mischievous streak from her siblings, could be found partaking in some sort of pranks around the town of Esk and the neighboring community. Esk was full of the Wildeman Family; aunts, uncles, cousins, brothers & sisters were all within a stone throw. Many wonderful memories were created as family met together on a weekly basis following Sunday morning church for fun, food and visiting. Mom was two years old when her oldest sister was married. She was closer in age to her nephews and nieces creating continuous strong bonds and friendships. During the depression, young men came to the Wildeman farm looking for work. One of these fellas had walked hundreds of miles from his home in Woodley, Saskachewan looking for a job. It was there that Esther first laid eyes on her future husband, John Kleckner. Soon after, a double wedding was held on November 3, 1938 in the Esk Evangelical United Brethren Church, sharing the day with Esther’s sister Clara & Ewald Pede, it was the event of the community. Esther & John resided in Esk for many years. It was during this time that their two sons, Rodney & Albert were born. Thirteen years later their daughter Patricia Ann entered the world. While John farmed and moved buildings, Esther managed the General Store & Post Office. Many happy and wonderful memories were made at their home in Esk. In 1957 John & Esther moved their family to Medicine Hat. Together, they managed motels, apartments, were cooks as well as dorm parents at the Hillcrest Bible School. Mom also worked at Kresge’s Department Store for many years and made friends wherever she went. She was predeceased by her parents, 6 brothers and 3 sisters, her brothers-in-law & sisters-in-law and her husband & lifelong best friend and companion, John Kleckner. She is survived by her children, Rodney (Edna), Albert & Patricia (Don) Borrows. She was blessed with 6 grandchildren, 15 great grandchildren, and 10 great-great grandchildren. She is also survived by one sister-in-law, Isabelle Kleckner & numerous nephews & nieces. Mom’s life was well lived as a precious gift of hope and grace and she made this world a much brighter place. She was content in all situations. She made the best apple pie – something that everyone in her family will attest to and no one has been able to duplicate. She welcomed all into her home without pretense or fanfare. All were welcome – anytime – anywhere. There was always room for one more at the table. No one was ever turned away. Mom’s hands were never idle. Baking, cooking, knitting, crocheting – always giving her finished treasures away to whomever would come through her door. Her family was of utmost importance to her. She was happiest when her children & grandchildren were together, eating, laughing, playing crokinole and sharing times together. When mom turned 95, she stated in a firm and confident voice – “I am going to live to be 100!” She did it! She will live on in our hearts forever. “A golden heart stopped beating. Hard working hands were laid to rest. God broke our hearts to prove to us, he only takes the best.” The Funeral Service will be held at SAAMIS MEMORIAL FUNNERAL CHAPEL, 1 Dunmore Road SE, on Saturday, November 9th, 2019 at 1:00 p.m with Pastor Clare Rattai officiating. Memorial gifts in Esther’s memory may be made to South Country Village, 1720 Bell Street SW, Medicine Hat, AB T1A 5G1. Condolences may be sent to condolences@saamis.com subject heading Esther Kleckner. Funeral arrangements are entrusted to