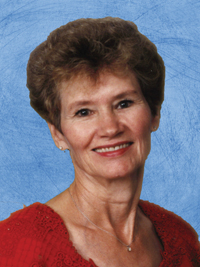 Elizabeth (Betty) Jean Kluzak passed peacefully with family at her side at the Sunnyside Care Centre in Medicine Hat on November 8th, 2019 at the age of 87 years. Betty is survived by Glen, her husband of 65 years; their 3 children, Donna (Greg) Balas, Norma (Warren) King and Gordon (Tania) Kluzak; seven grandchildren, Donovan (Kylie), Dara (Dan), Brock (Christine), Denton, Alexandra, Marina and Sophia; and three great-grandchildren, Reed, Bryn, and Theodore. Betty was born January 15th, 1932 in Bracken, Saskatchewan to Archie and Jessie Gates. They raised eight children on a homestead south of Climax Saskatchewan: Lucy, Betty, Ross, Christie, Margaret, John, Kathy and Ron. Betty was home-schooled until grade 7 when they moved closer to Climax. Betty took her nurses training in Moose Jaw. She was awarded a scholarship to complete her graduate training as an operating room nurse in Philadelphia in 1953. She married Glen Kluzak on Nov. 17, 1954 in Climax. They had a beautiful double wedding with her sister, Christie, and Bob Balfour. She was very special to her in-laws, Art and Hazel Kluzak; to Gordon (Dorothy) and Helen (Evan), Glen’s brother and sister; and to Helen and Cecil King. Betty and Glen moved to Moose Jaw where Betty was appointed as operating room supervisor. She ordered equipment and set up the operating rooms in the new hospital. In 1955, Betty and Glen moved back to Climax. Glen farmed and Betty worked as the Matron in the Climax hospital until they both retired and moved to Medicine Hat in 1995. She delivered many babies, including her grandson, Brock (on the way to the hospital in Medicine Hat). Betty and Glen enjoyed dancing, golfing, spending winters in Arizona, and following Gord’s hockey career all the way to the NHL. We would like to thank the skilled and caring staff at Sunnyside Care Centre where she spent her last two years and to those at Meadow Ridge and River Ridge where she also lived during her long journey with Alzheimer’s. An extra hug goes to Kim Schmeichel, our private care aide, who became like a member of her family.

You are invited to join us for a celebration of Betty’s life on Saturday, November 16th at SAAMIS MEMORIAL FUNERAL CHAPEL, 1 Dunmore Road SE, at 1:00 p.m. Memorial donations may be made in Betty’s name to the Climax United Church (General Delivery, Climax SK, S0N ON0. Condolences may be sent to condoleces@saamis.com subject heading Betty Kluzak. Funeral arrangements are entrusted to