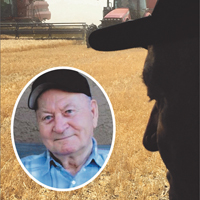 Howard Christian Olson, beloved husband of Barbara Olson, passed away peacefully on Nov 25th, 2019 at the Medicine Hat Regional Hospital at the age of 91 years. He leaves behind to cherish his memory his loving wife, Barbara; son, Randy (Lisa) Olson; daughter, Shelley (Frank) Olson; grandchildren, Shayla (Jesse) Farough, Spenser (Gabrielle) Olson, Sidney Olson (Janelle Friday), and Kaitlyn Aubin (Michael Knight); great-grandchildren, Malia Farough and Maren Farough; sister, Luella Pedersen, as well as numerous nieces and nephews. Howard was predeceased by his parents, Harry and Syneve Olson; his daughter-in-law, Sylvia Olson; and his two sisters, Hilda Swan and Muriel Seifert. Howard was born on a farm one mile west of the town of Robsart, SK. He attended school there and after finishing, decided to stay home” to see if farming was going to be his occupation”. He did venture out at one point, working in various places in Alberta, but soon realized this was not for him and returned to the family farm. Barbara and Howard raised two children until they semi-retired to Maple Creek. Throughout their 60 plus years of marriage, he continued to help out on the farm when he could– keeping it in the family for five generations! Howard and Barb moved to Medicine Hat in 2010, but the farm and Maple Creek were always near and dear to Howard. He made monthly trips back to town to visit his old stomping grounds. Howard loved the history of Maple Creek and the Robsart area. He always kept far more information to himself than he said. He was a true gentleman and a friend to all. The family would like to extend a thank you to the nurses and staff at 5E for the excellent care that Howard received. At the family’s request no formal service will be held. A private family interment will happen at a later date. Those who wish to make a donation, in his memory, can do so to the Robsart Cemetery Box 59, Robsart, Sk. S0N 2G0. Funeral arrangements are entrusted to