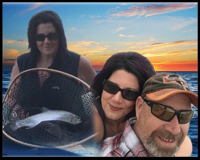 Laura Lee Mulner (nee Duchcherer), soulmate of Brent and beloved mother to Paige and Hannah, passed away on Monday, October 21, 2019, in Williston, North Dakota at the age of 46 years. Laura was born in Medicine Hat to Leon Duchcherer and Maureen Duchcherer Himmelspach (nee Hamilton) on April 23, 1973. She was raised and educated in various places due to her father’s work. In her teenage years, the family returned to Medicine Hat. At the age of 18, she met her soulmate, Brent Mulner and they were later married on July 19, 1997. To this union two children were born, Paige and Hannah. Laura was a talented carpenter and worked a period of time with Moduline Industries, constructing Modular Homes. She mastered building skills which she often used creating and constructing beautiful pieces for her home. When her children were born, she decided to hang up her tool belt and felt the best place for her was to stay at home and raise her children. Laura became active in her children’s school, their activities and the community. In 2012, the family moved from Canada to Williston, North Dakota. Laura loved it there and Williston soon became “Home” for her. They took a family vacation to Vancouver and also chartered a yacht traveling all over British Columbia fishing for halibut, salmon and crab. She enjoyed traveling, camping, fishing, hiking, bungee jumping, trap shooting and anything to do with the outdoors. Laura was an avid hunter. Her collection consisted of a bear, many moose, elk, deer, birds, fish and other wild game. She took pride in the fact that she would be the only woman on the hunting trip with her husband and friends and that she could hunt with the best and hunted better than most. Her most recent trip was a cruise to Fort Lauderdale, Cayman Islands and Mexico. Laura loved life, her family and her friends. She was a dear friend to many, had a good sense of humour, big heart, always had a smile on her face and had an infectious laugh. She was very passionate about her home and looked forward to the spring so she could plan out her garden, yard and greenhouse. She was happiest when digging up dirt and pulling weeds. When she wasn’t gardening, Laura would find time for a fun round of golf. Laura loved the holidays, especially decorating for Halloween and Christmas. She baked goodies and prepared many delicious meals not only for her family but also others. If Brent’s working crews had nowhere to go for the holidays, they were always invited and all were welcome at Laura’s home and dinner table. In 2014, while traveling to Lake Powel, Laura had a headache, so they decided to go to UC in St. George, Utah. It was there that she was diagnosed with brain cancer and her first surgery was scheduled. Her cancer went into remission in 2016, but reappeared in 2018. Laura was a warrior who never gave up and continued to fight. The family would like to thank family, friends, medical staff and others for their care, concern and love. Laura is survived by her husband, Brent; daughters, Paige and Hannah; mother, Maureen (Ralph) Himmelspach; brother, Frank (Gina) Duchcherer; sister, Wenonah (Steve) Waters; father-in-law, Brent (Mary Ann) Mulner; sister-in-law, Rhonda Kuntz; brother-in-law, Cameron Hildebrand; many aunts, uncles, cousins, nieces and nephews as well as her faithful four legged companion, Little Man. She is predeceased by her father, Leon Duchcherer; mother-in-law, Shirley Mulner as well as a very special grandfather who was very dear to her heart, Clarence ‘Specs’ Hamilton. A Celebration of Laura’s life will be held at Cook Southland Funeral Chapel, 901 – 13 Street S.W., Medicine Hat on Thursday, December 5, 2019, at 2:00 p.m. Interment will follow at Hillside Cemetery. (Condolences may be expressed by visiting www.cooksouthland.com) Honoured to serve the family is