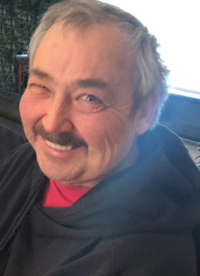 David William Sekerak, passed away in Bow Island on Thursday, November 28, 2019 at the age of 56 years.

The Funeral Service will be held at the Christian Community Church, 415 – 4 Avenue, Burdett on Saturday, December 7, 2019 at 2:00 P.M. Condolences may be forwarded by visiting our website at www.southlandfuneral.com.

He was predeceased by his parents Hank and Carol Sekerak and by his brother Stephen Sekerak and his sister Theresa Davis.

David was born in Galt, Ontario on April 15, 1963. He was the third child born to Hank and Carol, joining Stephen and Theresa, his older siblings. He shared how he nearly died at birth, being a ‘blue baby’, and how he needed many blood transfusions to get a start in this life.

David grew up on an acreage and his love of nature and gardening took root. He told how his dad taught him so much and the deep love and respect he had for him in his automotive sales career. He was always the best and first in sales!

David became a master electrician and was involved in many large Alberta projects. The day after he called his dad to tell him that he earned his ticket, his father suffered a heart attack and died. He later devoted his attentions to his mother Carol and sister Theresa. When Carol was weakening, David was there to feed her and was very attentive to her in Long term care.

David was always full of will and determination. Five years ago, he suffered a stroke/head injury and he spent months in the hospital and was not expected to live. He walked and talked again! He had a smile that would melt any resistance. David found a surrogate family with his church friends. They helped him with home construction projects and took him to many treatments and doctors’ visits following his cancer diagnosis. His friend Dallas was also a great chauffeur. The Homecare and the Family and Community Support Services ‘girls’ kept him comfy at home where he always wanted to be.

David taught us so much in his short life. He will be missed!