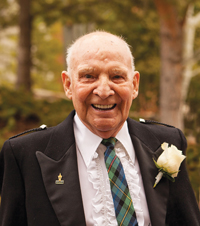 William “Bill” Walker Smith of Medicine Hat, beloved husband of the late Mary Smith, passed away on Tuesday, December 17th, 2019 at the age of 87 years. Bill leaves to cherish his memory two sons, Bill (Tena) Smith of Medicine Hat and Scott (Lynette) Smith of Strathmore; two daughters, Carol Smith (Robert) of Calgary and Linda Smith (Mike) of Medicine Hat; nine grandchildren, Steven, Katie-Lynn, Keltie (Brandon), Hailey, Sierra, Kellan, Keagan, Duncan (Jen) and Mackenzie (Alec); four great grandchildren, Elias, Chloe, Georgia and Michaela; one brother, George (Chrissy) Smith of Scotland; as well as numerous nieces and nephews. Bill was predeceased by his wife, Mary; and his parents, George and Mary Smith. Bill was born and raised in Edinburgh, Scotland where he met and married his loving wife of 58 years, Mary. In October 1966, Bill, Mary and family immigrated to Medicine Hat, where he became active in the Scottish Community. Bill loved Scottish Country Dancing and was granted Honorary Lifetime Membership in the Royal Scottish Country Dance Association. He spent many happy hours at Ceilidhs and workshops with family and friends enjoying the skill of the bagpipes. He worked as a carpenter for the Medicine Hat School District #76 for over 25 years, where he made many lifetime friends. Bill was a loving husband, father, grandfather and great-grandfather whose greatest joy was visiting with his grandchildren and great-grandchildren. The Funeral Service will be held in ST. JOHN’S PRESBYTERIAN CHURCH, 504 – 2nd Street SE, on Saturday, December 21st, 2019 at 2:00 p.m. with Reverend Jeff Lackie and Reverend Diane Beach co-officiating. A private interment will take place at Saamis Prairie View Cemetery. Memorial gifts in Bill’s memory may be made to the Medicine Hat SPCA, 55 Southwest Drive SW, Medicine Hat, Alberta, T1A 8E8. Condolences may be sent through www.saamis.com or to condolences@saamis.com subject heading Bill Smith. Funeral arrangements are entrusted to