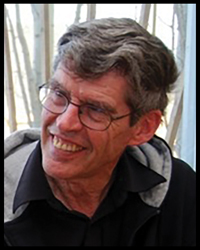 With sorrow and admiration, we announce the passing of David George Spencer (75 years, 7 June 1944 – 27 December 2019) following a relatively swift but intense bout with cancer. The grandson of prairie homesteaders, David was one of three hardy and capable farm boys (brothers Ernest and Hilton) raised by parents, George and Violet just outside of Craik, Saskatchewan, near Moose Jaw. From his early life, he had a knack for community-minded and interesting pursuits as a member of the 4-H Beef Club, the Craik band, the Matador Gang, and an x-ray crew checking prison inmates for tuberculosis.

In the late 60’s, he formalized his encyclopedic agricultural knowledge at the University of Saskatchewan, where he completed an original thesis on The Effects of Grazing on Natural Grassland of Clay Soils in Southwestern Saskatchewan. A fledgling nurse caught his eye in chemistry class; Dave and Arlette celebrated their 51st wedding anniversary this past harvest.

After stints as a young District Agriculturist in Medicine Hat, Spirit River and Fort Vermilion, as well as growing grass seed, alfalfa and pigs in partnership on a farm across the Peace River from La Crete, he and Arlette raised daughters, Tanya and Nicole on their own farm at Nampa (near Peace River) in the 70’s and 80’s. As a well-known D.A. in the Peace Country (offices in Falher and Peace River), he was a warm and witty resource: surveying his area, offering advice in the field and office as well as urgent spraying information over the phone at the supper hour. Intermingled with work were games of crib, innumerable coffees, and pea soup and buffalo burgers at the Falher Coop. Once in Peace River he could “have lunch with his wife”; they also enjoyed dining at the Travellers. It was then he began assembling an impressive collection of telephone insulators, a hobby that created yet another social network in which he seemed to know “everybody” between the Manitoba and BC borders and beyond.

After a transfer to the agricultural office in Medicine Hat as a Crop Specialist, he retired in 2002. His love of history found purchase in the local pottery and antique scene. He wrote detailed self-published accounts of National Porcelain and the 76 Ranches, later touring to give talks. He was a cheerful fixture on the local garage sale and thrift store circuit, often taking a moment to brighten people’s day with an uplifting observation. His motto as a skilful repairer and seller of mainly Western-themed treasures was to “buy junk and sell antiques.” His extensive and curiosity-filled tables at sales in the area featured lovingly displayed Altaglass and Medalta, lamps recently reunited with a period-specific shade, brand books, and always a toy to keep the young ‘uns entertained; Dave was the sort of country gentleman to whom small children, adults and animals were magnetically drawn.

In retirement, he travelled to many notable world destinations; he and Arlette saw sights and perused antique markets on five continents. He also cultivated a warm and loving relationship with grandson Armin. Their playful and on-going debate about broccoli was conducted over many Lego, toy building and Skype sessions; Armin was never able to convince Grandpa Dave of the vegetable’s merits.

He readily shared but never flaunted his keen intellect (though it sure came in handy at his thrice-weekly bridge games during hands of Dad’s favourite 4NT bid!) He strove to include and elevate anyone he met and was shrewd though discreet with his opinions. His daily routine of Suduko, thrift stores, fixing, and afternoon coffee at the A & W (where you get a real cup with refills AND a paper) was a rhythm that served him well.

Dave was predeceased by his parents, George and Violet Spencer, his younger brother, Hilton, and his parents-in-law, Roy and Stella Butler. He is survived by his wife, Arlette, daughters, Tanya and Nicole, grandson, Armin, brother, Ernest, sister-in-law, Wilma Spencer, and sisters-in-law and brothers-in-law, Joyce and Eugene “Bud” Godin and Carol and Tim Walliser, as well as extended family members.

Dave’s passing has left a sizable hole we intend to fill with the love, gentleness, diligence and sense of fun he exemplified. Please bring your fond memories and join us in a Celebration of his life at Cook Southland Funeral Chapel, 901 13th St. SW, Medicine Hat, AB, on Friday, January 3, 2020 at 10:30 a.m. In lieu of flowers, Dave requested well-wishers to consider donations to the charities near and dear to him: The Arthritis Society, Suite 150 – 110 Quarry Park Blvd. S.W., Calgary, Alberta, T2C 3G3 or the SPCA, 55 Southwest Drive S.W., Medicine Hat, Alberta, T1A 8E8. May we send a special thank you to the staff of the Medicine Hat Hospital for their skill, thoughtfulness and personal touch.

(Condolences may be expressed by visiting our website at www.cooksouthland.com) Honoured to serve the family is