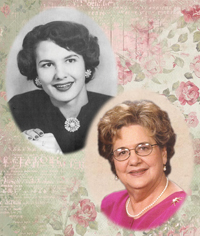 It is with a heavy heart that the family of Rose LaBatte announce her passing on Thursday, December 26th, 2019 at the age of 85 years. Rose is predeceased by her husband of more than 61 years Richard “Ritchie” LaBatte; father and mother, Kasmier and Katherine Melle; brother, Ralph; sisters, Celia (Howard) Lutz, Bernice (Lyle) Moir; and son-in-law, Wayde Walper. Rose leaves behind her loving six children, Gale LaBatte Walper, Bryan (April) LaBatte, Chantel (Clayton) Kiefer, Melanie (Jason) Wiebe, Cory (Ana Maria) LaBatte and Crystal LaBatte (Darren Hankey); her grandchildren, Brandee Goldade (Preston Ritchie), Brooke Goldade Kiefer, Cordero Walper (Kathleen Jackson), Breann (Travis) Robinson, Richelle LaBatte (Cody Booker), Cody (Vanessa) Torkelson, Connor (Meagan) Torkelson, Kennedy and Emily Torkelson, Matthew and Sofia LaBatte; great grandchildren, Hanna, Sydney and Morgan Lesnak, Terryn Ritchie, Lincoln and Waylon Robinson, Lyla Rose Torkelson; step great grandchildren, Kapri and Rhett Booker, and Katelyn, Krista, and Mattaya and Lochlan Hankey and Shea; brother, Manual (Mary) Melle, sister-in-law, Joan Melle. Rose grew up on the farm and attended school in Minton, Saskatchewan where she later became a teacher to the children of the community. She went to Regina and worked with her sisters Bernice and Celia in the hospital helping the sick and needy. On August 3rd, 1955 she married the love of her life Richard LaBatte in Minton, Saskatchewan. They set off on their journey together that brought them many different moves. Minton to Valleyview, Swift Current, Carnduff, Weyburn, Estevan, Calgary, Redcliff before finally settling in Medicine Hat. In 1976 Rose started LaBatte’s Oilfield Service Ltd. with Richard and their son Bryan until her retirement in 1996. There was nothing Rose loved more than spending the night dancing with her husband Ritchie. They made many trips together that allowed them to renew their love and passion for each other throughout the years. Rose carried herself with great class and dignity. She always had a kind word and encouragement to those who needed it. She showed an incredible attention to detail, which was displayed in her card making, crafts, crocheting, and the paintings. Her passions included baking and cooking, and she always made sure there was a place at the table for anyone in need. Rose was a dedicated member of the Oil Wives for over 50 years and enjoyed spending evenings out with her friends. Those wishing to pay their respects may do so at SAAMIS MEMORIAL FUNERAL CHAPEL, 1 Dunmore Road SE, on Friday from 6:00 until 9:00 p.m. Vigil Rites (Prayers) will be held at SAAMIS MEMORIAL FUNERAL CHAPEL, on Friday, January 3rd, 2020 at 7:00 pm. The Funeral Mass will be celebrated at ST. PATRICK’S ROMAN CATHOLIC CHURCH, 238 – 2nd Avenue NE, on Saturday, January 4th, 2020 at 10:00 a.m. with Father Tomy Manjaly, Celebrant. Interment will follow in the Roman Catholic Section at Hillside Cemetery. Memorial gifts in Rose’s memory may be made to the Carmel Hospice at St. Joseph’s Home, 156 – 3rd Street NE, Medicine Hat, Alberta, T1A 5M1 or to the Canadian Cancer Society, 325 Manning Road NE, Calgary, Alberta, T2E 2P5. Condolences may be sent through www.saamis.com or to condolences@saamis.com subject heading Rose LaBatte. Funeral arrangements are entrusted to