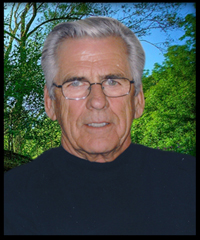 Dad peacefully entered into the Glory won for him by his Saviour the morning of January 4, 2020. He began his final journey early on January 2 when he asked for his daughter Wanda Fruson to join him at his bedside. Wanda, Dad’s loving wife (and our mom) Marlene and our cousin Jayda Zabolotney (a nurse and angel) then attended to him from that point on. After Wanda arrived, Dad then asked for his son Kurtis Kulman who was in the United States with his grandson Bailey. They quickly returned to Calgary and, together with his granddaughter Alex and his daughter-in-law Pat, drove to Medicine Hat and joined him later that evening. His grandsons Lee, Austin and Kyle Fruson, along with Kyle’s girlfriend Kelsey Pocsik, dropped what they were doing to join their family at his beside shortly after. Following that, his beloved sister-in-law and brother-in-law Eleanor and Melvin Zabolotney, with whom Dad and Mom had spent so many enjoyable years over the decades, arrived and took care of all of us by providing food, drink, love and laughter. Dad then patiently waited for his nephew and Godson Stacey Zabolotney, who was travelling from Vancouver and arrived at noon on January 3. Upon his arrival Stacey immediately proceeded to pick up Dad’s guitar, sit by his bedside and begin singing Dad’s favorite songs. With this prompting, the party quickly began along with the arrival of Jayda’s husband Wade Bierbach, as well as their daughters Anya and Annika, and following them Lee’s girlfriend Jenna Dalla Longa. While Dad was not always fully conscious, his heart and spirit shone through. In those brief and treasured moments when he was conscious, he joked around and even teased us a little. What a man!

Surrounded by joy, love, laughter and the language of music, Dad slowly, with his usual stubbornness, made his way toward his Saviour. We know that Dad’s surviving siblings Richard Kulman (and his daughter Tammy Brady), Clara Clarke and Adeline Zorn and their families and his many Kulman nieces and nephews, Mom’s brother Calvin Westgard, his wife Debbie, and their daughters Ashley (and her boyfriend Nathan and her daughter Hailey) and Britney Belanger (and her husband Jacob and their son Rowan), Dad’s niece Sasha Craven, her husband Mark and their children Eleandra and Blake, Stacey’s wife Bonne and their children Ava and Zay, Austin’s girlfriend Lindsey Ackert and Alex’s boyfriend Zac Cline would have loved to have been there and, truly, they were in spirit and love. We thank them for their love and prayers which lifted and supported us.

Dad was a simple, quiet, humble man who did not like to be the center of attention and, like all true, strong, Christian men, did not feel the need to puff himself up by words. True to form, and after 40 hours of hard work on his part, it was while we all were resting a little (other than our Mom who was attentive as always and Lee who was administering meds) that Dad peacefully took his last breath and walked through the Gate to his Saviour. We can only imagine that when Jesus asked him how he was, Dad responded as he always did “not bad for an old fart”.

In his death, as in his life, he taught us lessons by his actions without having to say a word. Lessons like unconditional love, humbleness, hard work, patience, peace, trust in God and that there is a time for everything. As Dad said to Wanda before he left us “these things happen”.

We love you Dad. We will join you shortly.

A Service of Thanksgiving will be held at Victory Lutheran Church, 2793 Southview Drive S.E., Medicine Hat on Tuesday, January 7, 2020 at 1:00 p.m. with Reverend Jim Bredeson officiating with the assistance of Pastor Roland Weisbrot. Lunch will follow immediately thereafter. A private interment will be held prior to the service.

We ask that, in lieu of flowers, anyone wishing to do so, may donate to the Victory Lutheran Church’s Perpetual Remembrance Fund. (Condolences may be expressed by visiting www.cooksouthland.com) Honoured to serve the family is

Leave a Condolence for Peggy Kretz