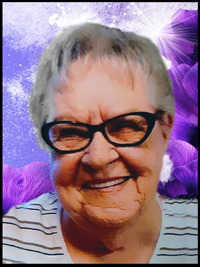 It is with broken hearts that the family announce the passing of Loretta Josephine May Spragg at the Medicine Hat Regional Hospital on Friday, January 3, 2020, at the age of 84 years. Loretta is survived by her six children, Debbie Rajotte of Salmon Arm, BC., Danny Lemoel of Vancouver, BC., Laura (Bill) Seigo of Regina, SK., Kathy Pearce of Medicine Hat, AB., Larry (Tina) Spragg of Airdrie, AB. and Steven Spragg of Calgary, AB.; together with her 16 grandchildren and 20 great-grandchildren as well as her brother, Larry Wiles of Langley, BC. Loretta was predeceased by her first husband, Andy Lemoel and her second husband, Joseph Spragg; father, Charles Wiles as well as her mother, May Hettervig whom Loretta lovingly cared for during May’s battle with dementia. Loretta was born and raised in British Columbia and although she came to reside in Medicine Hat in 1978, a huge part of her heart remained in BC. Her faith was a very important part of her life as an active member of the Seventh Day Adventist Church. Loretta formed close bonds with her friends. She was a hard working woman in her everyday life as well as in her faith. Loretta loved to cook, visit with friends and was a great support to those in need. She had a way of telling a great story and could make everyone laugh. Inspite of her battle with dementia, that ability to laugh and smile never left her. She really was loved by all. During the last few years of Loretta’s life, she depended more on her extended family in the Assisted Living and Extended Care. Loretta was always grateful, gracious and thankful for the kindness and care she received. The family would like to thank all who were involved in Loretta’s care; you know who you are! Remember to Live, Love and Laugh. A Come & Go Tea Celebration of Loretta’s Life will be held at Masterpiece Southlands Meadows, 4401 Southlands Drive S.E., Medicine Hat, on Saturday, January 18, 2020, from 1:30 p.m. to 4:00 p.m. on Level One. The family will honour Loretta’s life with a private service at a later date. If friends so desire, memorial donations in Loretta’s name may be made directly to the Alzheimers Society of Alberta, #210, 770 – 6 Street S.W., Medicine Hat, AB, T1A 4J6. (Condolences may be expressed by visiting our website at www.cooksouthland.com) Honoured to serve the family is