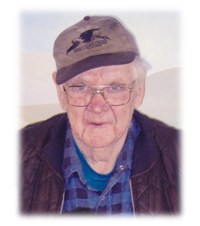 Mr. Emil Jesske passed away peacefully at the Haven Care Centre, South Country Village in Medicine Hat on Saturday, December 14, 2019, at the age of 93 years. Emil was born in Liebenthal, SK., and grew up on the family farm South of Leader. He would walk one and a half miles to school in all kinds of weather! Emil had a strong work ethic and drove horses early in the morning and late into the evening. He ranched in the Robsard District South of Maple Creek. He also helped other family members with their farm work, including his love for gardening, especially vegetables. A frugal man, he learned to fix and repair things with little to no resources – that was his way. Emil was a great story teller and enjoyed being a jokester. After retiring to Medicine Hat, he became a member of the Veiner Centre enjoying lunch and visiting several times a week. Emil was pre-deceased by his parents, Rudolf and Lydia Jesske; siblings, Adolf Jesske, Henry (Martha) Jesske, Albert (Elma) Jesske, Ida (Lewis Hoffman, Dan Pudwell) Hoffman Pudwell, Edna (Albert) Burkart, Edwin (Ruth) Jesske, Reinhold Jesske, Harvey Jesske and Raymond Jesske. He is survived by his siblings, Elma (Albert) Herrmann, Millie (Morley) Desjardine; sisters-in-law, Emma Jesske and Arlene Jesske as well as numerous nieces and nephews. The Funeral Service will be celebrated in the Weurful Auditorium at South Country Village, 1720 Bell Street S.W., Medicine Hat on Friday, January 10, 2020, at 2:00 p.m. Interment will take place at Hillside Cemetery, with lunch to follow in the Heritage Centre at South Country Village. If friends so desire, memorial tributes in Emil’s name may be made directly to South Country Village, 1720 Bell Street S.W., Medicine Hat, Alberta T1A 5G1. (Condolences may be expressed by visiting our website at www.cooksouthland.com) Honoured to serve the family is