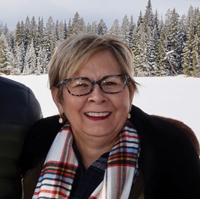 It is with the heaviest of hearts that we announce Rosemary Baumback, beloved wife of Wayne Baumback, passed away in Edmonton, Alberta at the age of 63 following a courageous and determined battle with brain cancer. Rosemary leaves to celebrate her legacy her daughter Nicole Baumback and son-in-law Jeff Pugh as well as her son Brett Baumback and daughter-in-law Jenelle Butler. “Nana” will forever be adored by her granddaughters, Elise and Nora Baumback. And for her role as back-up grandma, “Rose” will be fondly remembered by Emma and Rhys Pugh. Rosemary is also survived by siblings Peter Gwinner, Roberta Gwinner, Julie Munro, Daniel Gwinner and families as well as her brothers-in-law Bryan, Terry, and Ken Baumback and families. Rosemary was predeceased by her parents Freda and Robert Gwinner

and her sister Lillian Fisher. Rosemary was born and raised in Medicine Hat. She spent much of her early years attending the Salvation Army church and helping out with her parents’ catering and restaurant businesses, acquiring a tireless work-ethic and strong volunteer spirit from her immigrant family. She graduated from Medicine Hat High School in 1974 and married Wayne, her highschool sweetheart in 1976. They remained in Medicine Hat to raise their family. She worked for 24 years as an elementary school secretary for Medicine Hat School District 76, with 18 of those years at Ross Glen School. She retired in 2013, then in 2017 took the big step of moving to Edmonton to be closer to her children and grandchildren after calling Medicine Hat home for 61 years, leaving behind so many of her dearest friends. This decision proved to be simultaneously

her greatest challenge and greatest fortune in life–she was diagnosed with terminal brain cancer 4 months after the move and subsequently spent the last 2 years of her life living to the fullest, loving and being loved beyond description, all while facing the grueling challenges of her

illness with grace and positivity. Rosemary will be deeply missed and affectionately remembered by all who knew and loved her. Many thanks to the staff at the Misericordia Hospital ICU for the gracious and dignified care shown to our entire family during Rosemary’s final days. A celebration of Rosemary’s life will be held from 11am-2pm on Saturday, January 18, 2020 at Medalta. In lieu of flowers, we ask that you please consider a donation to Medalta or another charity or non-profit of your choosing.

Leave a Condolence for Anna-Jean and Bud Olson and family