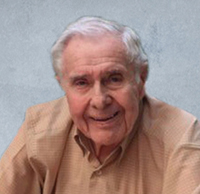 George William Renner passed away on January 16, 2020 at the age of 88 years. He was predeceased by his wife, Thelma and sister, Rose. He leaves to cherish his memory his three children, Rob Renner (Gail Fergusson), Patricia (Jim) MacArthur and Chuck (Susan) Renner. He also leaves one granddaughter; Rachel Senneker (Daniel) and one step-brother, Jim (Mona) Jesse. Born on his parent’s farm in Burstall, SK., the family moved to Hilda where they owned and operated a General Store. After selling the store, he moved with his father to Medicine Hat where he completed his education. George and Thelma met while attending Alexander High School and were married in 1951. Together they founded The Rosery Florist and operated it as a family business for 44 years. During that time, George assumed numerous industry leadership roles in the florist associations. He was proud to represent Canada on the Board of Directors of FTD (Florist’s Transworld Delivery) and also on the board of Interflora, the international equivalent of FTD. During those years George and Thelma traveled extensively throughout the world representing Canada and FTD. George also served on City Council in the late 60’s and early 70’s and again in the 80’s and 90’s. Active in politics most of his life, he volunteered in various capacities on every provincial and federal election campaign; particularly those of Jim Horsman, Bob Porter and Rob Renner. In addition to politics, George was a leader in several community organizations, serving as past president of the Medicine Hat Exhibition and Stampede, Kinsmen and the Cypress Club. The move to an acreage south of the city on the Black and White Trail led to many happy years of involvement with horses; including horse shows throughout Western Canada and even a couple trips to Toronto. George had many fond memories of the 4H Horse Club and trail rides in the mountains with the Four SeasonsSaddle Club. After retirement, George enjoyed golfing, camping at Elkwater and motorhome trips with Thelma throughout North America. George had a special place in his heart for his home care workers and his many friends in the Filipino community. The Renner family would like to thank the staff at Carmel Hospice in St. Joseph’s Home for their kind care and support. The Funeral Service will be held at FIFTH AVENUE MEMORIAL UNITED CHURCH, 476 – 4th Street SE, Medicine Hat, AB T1A 0K6, on Tuesday, January 21st, 2020 at 1:30 pm with Pastor David Pollard officiating. Condolences may be sent through www.saamis.com or to condolences@saamis.com subject heading Renner. Funeral arrangements are entrusted to