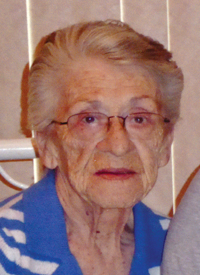 With heavy hearts the family of Ilaine Meade (nee Tudor) announce her passing on January 23, 2020 at the age of 85 years.

Ilaine was born in Lethbridge, AB and grew up on the family farm near Wrentham, AB. She spent many years in Grande Prairie, AB before retiring to Medicine Hat. In the last couple of years she moved north again to High Level, AB. She was a kind and generous lady who was always adopting strays – whether it was kids, cats or dogs. Ilaine enjoyed many hobbies but her favorite by far was Bingo! She was usually “one away!” or “damn near!”

Honouring Ilaine’s wishes, no formal funeral service will be held. The family has chosen to have a private celebration of life in the spring of 2020.