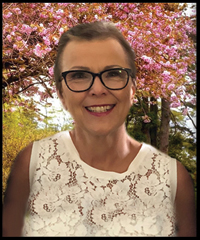 It is with heavy hearts that we the family, announce the passing of Rosemarie Ober on Friday, January 24, 2020, in Medicine Hat, Alberta. She leaves behind the love of her life, Shawn Chisholm; son, Christopher (Dara); daughter, Jenni (Tyler); her beloved grandchildren, Preston, Nolan, Keira, Jayden and Grayson as well as Shawn’s daughters, Katie (Logan) and Laura (Joel) and their children Sophia, Jude, Iya and Luca. Rosie also leaves behind her mother, Joyce Metz; sisters, Janet (Ron) and Kate (Ken) as well as many nieces, nephews and a multitude of friends. She was greeted at the gates of Heaven, by her father, Joe Metz; sister, Jane Paul as well as her grandparents. Rosie was born in Shaunavon, Saskatchewan to Joe and Joyce Metz on February 2, 1960, the youngest of four girls. She attended school in Gull Lake, Saskatchewan and studied Business Administration at the Medicine Hat College. She worked for many different construction companies and always had her own business, as many of you know, because she probably did your taxes. Rosie lived to serve those around her and never rested until she was done. She lived life to the fullest and spent many hours with her children and grandchildren. Rosie travelled extensively and took every opportunity to try new things. She loved Scouts Canada and enjoyed camping, curling, golfing and playing cards. Rose’s family would like to thank the doctors and nurses in the Margery E. Yuill Cancer Centre as well as the medical staff at the Medicine Hat Regional Hospital for the outstanding care for Rosie. A Celebration of Rosie’s life will be held at Cook Southland Funeral Chapel, 901 – 13 Street S.W., Medicine Hat on February 8, 2020, at 2:00 p.m. with Life Celebrant Gerry Getz officiating. In lieu of flowers, Rosie would appreciate your donation to the Margery E. Yuill Cancer Centre, 665 – 5 Street S.W., Medicine Hat, Alberta, T1A 4H6. (Condolences may be expressed by visiting www.cooksouthland.com) Honoured to serve the family is

One Condolence for “ROSEMARIE OBER”