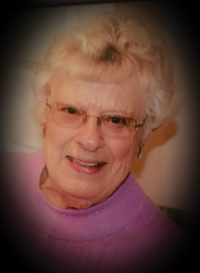 It is with heartfelt sadness that we share the news of the passing of Shirley Stewart on Sunday, February 9th at St Joseph’s Home – Carmel Hospice at the age of 89 years, following a courageous battle with cancer. Shirley leaves to cherish her memory her children Jim (Laura) Stewart, Shelley (Brian) Wisnowski and Sandi Stewart; her step-children Maida (aka Jeannie) Kellgren, Glen (Kris) Stewart and Ursula Stewart; and her grandchildren Ashley Stewart, Regan Wisnowski, Katlyn Brown, Tyler Stewart, Zachary Stewart, Kristjana Bruveris and Cameron Stewart. Her presence will also be missed by her great grandchildren Amelia, Mariah, Makenna, Hadley, Easton, Stanley, Bryson and Rori, and she will be fondly remembered by her good friend Elsie Duke and by Tannis Stewart. She was predeceased by her husband William (Bill) Stewart, parents Reginald & Mabel Simmonds, her special friend and companion for 8 years Harry Mutschler, stepson Gordon Stewart and son-in-law Viego Kellgren. She has also been reunited with her good friends Daphne Keeler and Margo Weiss, who also passed on in this past year. Shirley was born on May 5, 1930 in Regina Saskatchewan, an only child to Reginald and Mabel Simmonds. She was raised in Regina where she met and married Bill on January 2, 1961. Her 3 children were all born in Regina. In the fall of 1969, the family relocated to Medicine Hat where she resided until her passing. Shirley was employed at Alpha Dairy for many years until they closed their doors in 1994. Shirley enjoyed golfing and even managed to get a hole-in-one at Paradise Valley in 2016 at the age of 86. She loved attending Medicine Hat Tigers games and listening to the out of town broadcasts on the radio. An avid fan, she rarely missed watching the Saskatchewan Roughriders or the Toronto Blue Jays play or tuning in to watch curling or golf on TV. She also liked going out to watch the chuckwagon races at the MH Stampede every year. Shirley treasured spending time with her family and friends and will be dearly missed by all who knew and loved her. The family would like to thank the nurses on 5W & 5E of the MH Regional Hospital, the nurses and HC aides at Meadowlands, and all of the staff at St. Joseph’s Home for the compassionate care she received over the past year. A Celebration of Shirley’s life will be held at Cook Southland Funeral Chapel, 901 – 13 Street S.W., Medicine Hat on Saturday, February 15, 2020, at 2:00 p.m. with a time of fellowship thereafter in the Cook Southland Reception Facility. (Condolences may be expressed by visiting our website at www.cooksouthland.com) Honoured to serve the family is