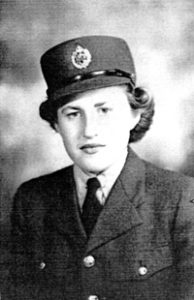 Norma Elaine Danyluk (nee Ans) passed away peacefully on February 5, 2020 at the age of 95 in Medicine Hat, AB. She was predeceased by her husband Walter Danyluk on October 15, 2003 and is survived by her son Bruce Danyluk of the R.M. of Springfield, MB; daughter Susan (Eric) Clay of Pias, Portugal; daughter Shelagh Corless and family friend Denise Hanson of Medicine Hat; and grandchildren Kate-Lyn Danyluk (Steven Skehar) of the R.M. of Springfield, Angie Zaid of Winnipeg, Annan Harley of Toronto and Scott Harley of Montreal.

Norma was born on April 13, 1924 in Whitemouth, MB. During WWII, she was one of the first generation of women to serve in the RCAF (Women’s Division). Prior to leaving her military job, she received an engagement ring in the mail from her boyfriend Walter, then serving as a Lancaster pilot in England. When the war ended, she and Walter married and moved to Vancouver where Walter attended UBC. After graduation, they moved back to Manitoba and Walter began his career with the Manitoba Government. Walter’s career took them to Rennie in the Whiteshell, and subsequently to Winnipeg.

In the mid-1970s, Walter and Norma purchased a rural property in the R.M. of Springfield. Norma never stopped talking about her love of “The Farm”. At the “farm”, she spent many happy hours in the garden and in her pottery. When Walter passed, Norma moved to Medicine Hat to be with her youngest daughter Shelagh.

The family wishes to thank the staff of the Riverview Care Centre and the Medicine Hat Hospital for their compassionate care of our Mom. At Norma’s request, no funeral is planned. It is suggested that those wishing to make a donation in Norma’s memory direct their donations to the Cardiac Care program at the St. Boniface Hospital in Winnipeg, through the St. Boniface Hospital Foundation.