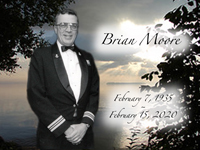 On Saturday, February 15, Brian Moore passed away following a prolonged battle with cancer. He will be lovingly remembered by his daughters, Janet (Mark) Hutchison and Trish Moore (Scott McDonald); grandchildren, Meaghan and Liam Hutchison as well as his sisters, Mona Anderson and Nora Dewhirst. Brian was predeceased by his wife, Patricia. Brian was born in Camrose, Alberta. After high school, he was accepted into the Officer’s Training programme of the Canadian Armed Forces and was proud to be a Royal Canadian Dragoon, an Armoured Corps division. Brian met Pat in Germany, where he was stationed in Iserlohn and Pat taught at the Canadian school in Hemer. They married in Pat’s home town of Simcoe, ON and raised their family across Canada. During this period, Brian was selected to take part in the Armor Officer Advanced Class at the Armor School in Fort Knox Kentucky and graduated on the Commandant’s list. Brian was deployed to a UN Peacekeeping mission in Cyprus, taught at the Canadian Land Forces Command & Staff College in Kingston ON, and was Base Personnel Officer in Shilo, MB. Brian took his retirement posting in Medicine Hat. After retirement, Brian was active with the militia and served as Commanding Officer of the Southern Alberta Light Horse from 1984 to 1988. In their later years, Brian was a devoted husband to Pat as she experienced many years of illness. He will be remembered as a kind and gracious man with a fascination for military history and great love for his family and friends. Janet and Trish are very grateful for the support Brian received from Mike Vanak and the Caring Hearts team, Home Care, Meals on Wheels, the Medicine Hat Regional Hospital and his warm-hearted neighbours, Doris and Darien Osterhold. A private celebration of his life will be held at a later date. In lieu of flowers, memorial donations can be made to the Canadian Cancer Society, 200 – 325 Manning Road N.E., Calgary, AB, T2E 2P5. Condolences may be expressed by visiting our website at www.cooksouthland.com Honoured to serve the family is