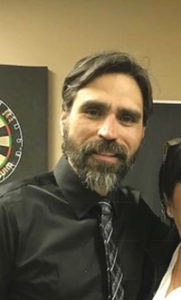 It is with heavy hearts that we announce the sudden passing of our beloved son, brother, father, uncle and spouse Leonard Joseph (Rob) Robillard on February 17, 2020 in Edmonton AB. Rob was born in Medicine Hat AB on March 17, 1973 and graduated from Medicine Hat High School in class of 1992 He moved to Edmonton AB to attend the University of Alberta where he made long lasting connections and met his long term spouse. He was a passionate husband, father and consumer of political knowledge. He worshipped his family and his children and held them closest to his heart.

Like many men in Alberta, the oilfields called to him as a means of providing for his young family. He spent a few years on oil rigs and later transitioned into commercial construction. Eventually landing with PCL, he found a work home and many acquaintances and where he touched many lives as a leader, a role model and a booster of morale. Aside from his robust work life he was a deeply sensitive person. Rob thoroughly enjoyed and partook in many of the beautiful things in life such as spending time with his large family, nature, poetry, music, aboriginal art, photography, writing, travelling, sports fandom and playing with his children as he was young at heart himself. He was intelligent, funny, uniquely handsome and had charisma that attracted good people to him.

Leonard’s funeral service will be held on Saturday February 29, 2020, 10:00 am in the chapel at TRINITY FUNERAL HOME LTD. 10530-116 Street Edmonton AB T5H3L7. His interment will follow the service at Little Mountain Cemetery 16025 54 Street Edmonton AB. Reception to be announced once finalized. This is a public funeral so all who wish to pay respects are welcome.