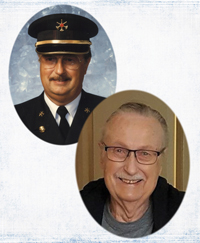 Mr. Lawrence Sanford “Lawrie” Kvist of Medicine Hat, beloved husband of Patsy Kvist, passed away on Saturday, February 22nd, 2020 at the age of 85 years. Lawrie leaves to cherish his memory his daughters, Cheryl Scarlett, Deanna McNab and Valerie Beauchamp and their families; stepdaughter, Erica Kelly and family; and stepson, Brandon Stone and his family. Lawrence was predeceased by his parents, Gustav and Gladys Kvist; and one sister, Jean Griffiths. Lawrie had a very busy and fulfilling life, balancing his careers with his love of both winter and summer sports. Before joining the Edmonton Fire Department, Lawrie held careers in banking, the oilfield industry, and at General Motors (GMAC). During his time with the Fire Department Lawrie played in the marching band and found time to refinish classic cars and renovate homes. He also built a camper so that he could go anywhere at any time. After his retirement in 1991, Lawrie went to work at the Legislative Assembly of Alberta as a tour guide. In 1996, Lawrie and Patsy began a new chapter in their lives, making the decision to live in their RV near Yuma for six months of the year. Many hours were spent hiking in the desert and spending time with his much beloved cousin, Gordon. It was also here that Lawrie began his love affair with wood carving. During the warmer months of spring and summer, Lawrie and Patsy made Osoyoos, BC their base for volunteering as campground hosts for BC Parks. In 1999, they settled in Osoyoos as Lawrie’s health began to fail. Lawrie fought through a bout of cancer but was then diagnosed with Parkinson’s disease in 2007. It was this diagnosis that spurred their move to Medicine Hat to be closer to their family. Once settled, Lawrie started swimming mornings at Crestwood Pool where he met new friends who remained even after the effects of Parkinson’s required him to give up swimming. Lawrie joined the Parkinson Group here in Medicine Hat and made friends with many great people who loved to visit and go for lunches and coffee. He will be deeply missed and remembered for his kindness, dry wit, good conversations, and willingness to always help out when and where needed. A Come and Go Celebration of Lawrie’s life will be held at ROYAL CANADIAN LEGION, 702 – 2nd Street SE, on Wednesday, March 4th, 2020 from 2:00 to 4:00 p.m. Donations in Lawrie’s memory may be made to the Edmonton Firefighter’s Burn Treatment Society, Suite 1, 7024 – 101 Avenue NW, Edmonton, Alberta, T5K 2N2. Condolences may be sent through www.saamis.com or to condolences@saamis.com subject heading Lawrie Kvist. Funeral arrangements are entrusted to