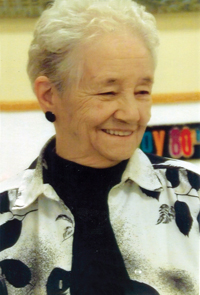 Laura Marie Tuchscherer, beloved wife of the late Mike Tuchscherer, passed away peacefully with family at her side in Bow Island on Monday, February 24, 2020 at the age of 84 years.

The Funeral Mass will be celebrated at St. Michael’s Catholic Church, 1113 – 1 Street East, Bow Island on Tuesday, March 3, 2020 at 11:00 A.M. A private burial service will follow at the Bow Island Cemetery. Condolences may be forwarded by visiting our website at www.southlandfuneral.com.

Laura is survived by her five children Lyle (Bonné) Tuchscherer of Bow Island and their children Andrea (Eric) Lodders and Richele (Jeff) Staseson; Wendy Torscher (Darwin Rowland) of Milk River and her children Stephen (Suzanne) Torscher and Ryan (Kelly) Torscher; Glen Tuchscherer of Bow Island, Lloyd Tuchscherer of La Crete and Laurie (Roy) Matz of Grassy Lake and their children Owen Matz (Kaylea McKenna) and Megan (Thomas) Thiessen. She is also survived by nine great grandchildren and one on the way. She will be remembered by her sister Leona Dutcher and numerous nieces and nephews.

She was predeceased by Mike, her loving husband of fifty seven years, her parents John and Irma Baesen as well as several brothers and sisters-in-law.

Laura was born in Edmonton on May 9, 1935. She was raised in Drumheller and later attended business school and enjoyed working at a bank in Calgary. She met Mike at her parents boarding house in Drumheller. They were married on June 10, 1953 in Calgary, then moved to the Bow Island area where they started farming south of town. In 1960, they bought land ten miles north of town, built a house and continued raising their family.

Laura was very active in many volunteer organizations over the years, including The Women’s Institute, Red Cross and The Heart and Stroke Foundation. She was a charter member of The Bow Island Catholic Women’s League, joining in 1954.

Laura and Mike retired and moved into town in 1990. She remained in the house after losing Mike in 2010 then moved to the Pleasant View Lodge in 2014. Her last several months were spent in the Bow Island Health Centre where she will be remembered by the staff for her sense of humour and sarcasm.

Laura will forever be remembered for her caring heart and love of family and friends.

If friends so desire, memorial tributes in Laura’s name may be made directly to the Bow Island and District Health Foundation, Bag 3990, Bow Island, Alberta T0K 0G0. Your donation can be designated to your choice of either the Palliative Care Unit or Long Term Care.

The family would like to express their deepest gratitude to the doctors and nursing staff for their never ending care.