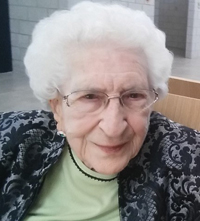 Mary died on March 9th, 2020. Within mere days of leaving us, the COVID 19 Global Crisis hit Canada. In what we as a family view as a fascinating irony, it was 101 years ago that Mary arrived in this world at the peak of another global crises, the Spanish Flu. During this time of uncertainty, our family has decided to delay a gathering for the celebration of her life until her interment in Weyburn, SK later this year. In lieu of a funeral at this time, our family decided we would share this brief story of her life and importantly to thank the many people who showed wonderful kindness and friendship to Mary.

Mary’s life was filled with love, caring, hard work and frugality, all traits demanded by the challenges of the rural Canadian prairie in the early twentieth century. She was quiet and shy, very courteous (perhaps to a fault), but beneath this quiet external peaceful persona was a fierce independence. Mary always believed in learning, hard work, sharing and giving back to community. Family members cannot recall her ever speaking unkindly of others. Mary was born on November 20th, 1919 at home on the homestead farm near Weyburn, Saskatchewan to her midwife mother, Ethel Symes, and her father, bank manager turned farmer, James McNeil. Both were staunch believers of the Presbyterian-United faith. Growing up, Mary, a dedicated student, would ride her pony to her one room schoolhouse and became an accomplished horsewoman. At the age of 16, she lost her father in the midst of extreme drought and the Great Depression. Her mother, uncle, little brother, and herself were left to manage the family farm during a difficult time. It was then, helping to keep the family farm going after her father’s death, that Mary came to understand and develop her belief that Canada and our world would only be strong when we cared for each other and shared our good fortune.

In 1940, Mary met and married Kasper Adam Wanner. At the beginning of WW II, national origin, religious difference and limited income were all very much a challenge that Mary and Kasper faced…but love prevailed. They moved on to her beloved Uncle Fred’s small farm near Weyburn, where sons “Jimmy” and “Bobbie” were born and raised. Mary and Kasper were very socially active contributing their time to school, community and church activities. Nodding to her independence, Mary became a Cub Scout leader during a time when women were not doing so. In 1970, Mary and Kasper retired from the farm and moved into Weyburn where they continued to be active volunteers in St. Vincent de Paul Parish as well as many Weyburn community events. In his later life Kasper developed dementia and so they relocated to Medicine Hat to be near Robert and Joan’s family. In 1993, Mary lost her love, Kasper. The quiet force that was Mary was determined to be independent so she got a bus pass, became friends with the drivers, and became a regular volunteer at the Medicine Hat Hospital and the Veiner Centre. In 2010, at the age of 91, Mary was recognized by the City of Medicine Hat with a ‘Golden Hero Award’ for what she called ‘…helping the old people…’

Over the years Mary developed a network of friends including Marilyn Heckbert, who became very close and Eva Lewis, who regularly visited for tea. At the South View Grand condominium, she had many close friends and neighbours including Brigitte Grimm and Irene Thearns.

In 2017, Mary moved to Valley View Age Care where she remained until her final days still being visited regularly by friends. Mary was incredibly grateful for the kindness of the caring staff, kind neighbours, and her dear friend and neighbour, Catherine Heines.

In addition to Kasper, her father James McNeil predeceased her in 1937; her mother, Ethel Symes in 1978; and her brother, Malcolm McNeil in 2012; as well as her numerous brother and sister-in-laws.

For her 12 great grand children and numerous great grand nieces and nephews she leaves her endless love and a message of “…be happy, share and help others, and be the best that you can be…” and to the rest of us, especially during these uncertain times, Mary would ask that we always reach out to others. Prior to our current time of social distancing, Mary would most certainly have asked that you “…. invite someone over for tea and cookies”, but today she would have asked that you reach out to others with a phone call or a virtual hello. Please reach out to someone on behalf of Mary and say hello and be strong. Condolences may be sent to Saamis Funeral Home at www.saamis.com or to condolences@saamis.com subject heading Mary Wanner. Funeral arrangements are entrusted to