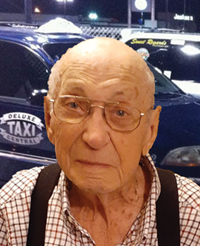 Waldemar Radke of Medicine Hat, loving husband of Joyce Gehring, passed away on Tuesday, March 24th, 2020 at the age of 95 years. Wally leaves to cherish his memory daughter, Dianna (Mark) Gyorkos and children, Nathan (Ashley) Gyorkos and Kassia Gyorkos (Edwin Angarita); son, Mitch Radke and his daughter, Larissa Radke; son, Harold Radke; son, Stanley Radke Radke and children, Stacy, Paul, Teresa Vishkon and Brenda Vishkon; son, Richard (Shirley); son, Raymond Radke and his children, Stacey (Brian) McHale and Jeff Radke; son, LeRay (Cheryl) Gehring and their son, Chance; daughter, Denise Leonard and her children, Brittany (Steven) Leonard, Breanna Leonard, and Joseph Leonard; as well as numerous nieces and nephews. Wally was predeceased by his father, Rudolf Radke; grandson, Dwayne Radke; brother, Ewald Radke; and daughter-in-law, Janice Radke. Wally was a very social person with a great sense of humour, and he was fortunate to make many friends in his lifetime. He enjoyed the time he spent at Dairy Queen having regular coffee visits. He was very proud of being a taxi driver for over 30 year for Deluxe Central Taxi. His interest and love for fixing things meant that he could often be found in his garage. He could fix almost anything and so he became the ultimate handyman. A private graveside service will be held at Hillside Cemetery. Due to the Covid-19 Virus, the graveside service is by invitation only. A Memorial Celebration for Waldemar will be announced at a later date. Memorial gifts in Waldemar’s memory may be made to the Alberta Heart & Stroke Foundation, 200, 119 – 14th Street NW, Calgary, AB T1A 7L5. Condolences may be sent through www.saamis.com or to condolences@saamis.com subject heading Waldemar Radke. Funeral arrangements are entrusted to