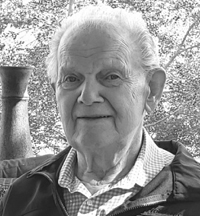 On Thursday, March 26th, 2020, Peter Lloyd Kroeker went right on time, to be with his Lord and Savior, Jesus. Surrounded by Lee, his loving wife of 60 years and their children, Kevin (Wendy), Marlin (Susan) and Kim Friesen (Reg), Peter made the transition to Heaven at the age of 83 years.

Peter was born at Sand Beach, Sask. on July 15th, 1936. He was the third born of six children. At the age of 15 Peter moved to B.C. He later met Lee at their church and it was love at first sight for him, but Lee took a bit of coaching. They were married in June of 1959. He graduated in 1964 from Miller College of the Bible and pastored a church in Vanguard, Sask., after which they returned to B.C. where Peter had several businesses. He was a gifted man and mastered many skills when it came to construction. In 1997, Peter and Lee moved to Medicine Hat, the rest of their children and grandchildren followed shortly thereafter.

Peter’s heart was filled with a love for people. He spent many hours serving and giving to others.

Peter is predeceased by his father, mother and his older brother. He is survived by his wife, children, 10 grandchildren and 7 great-grandchildren who loved him dearly.

Given the present circumstances a memorial service is being planned at a later date.