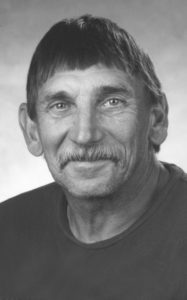 It is with profound sadness that we advise the sudden passing of Garry on Monday, April 13, 2020 at the age of 65 years.

Garry was born in Roblin, Manitoba and moved to Alberta after High School and found his life work as a proud Union Iron Worker. He worked on structures and bridges from B.C. to Ontario and was quick to point them out when passing by as “his”: including the Calgary Saddledome. After 30 years, a serious work accident ended his iron work career. He is a Life Member of Local 725 of the Iron Workers Union. For the last 15 years Garry has been the used lot manager for Murray Chevrolet Cadillac in Lethbridge.

Left to mourn his passing are his wife, partner and best friend of 36 years Margaret Cook Pound; step-son Patrick (Kelly) Lawlor; beloved granddaughter Audrey Lawlor, and his special Yorkies, Sophie and Bella; in Manitoba he leaves his sister Sherryll (Marty) Jeffery and their children Kris and Shawn and their families; brother Eric (Janice) and their child Robyn and her family; as well as nephews Kevin and Keenan Pound. Garry had a family of friends at Murray’s who will miss him as well.