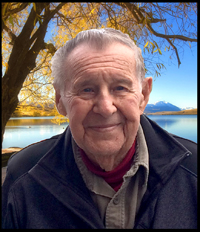 John Kosik, beloved husband of the late Alice Kosik, passed away peacefully in the comfort of his home in Medicine Hat on Wednesday, April 22, 2020, at the age of 89 years. John was born July 4, 1930, in Abbey, Saskatchewan to Kalistrat and Kataryna Kosik. At the early age of 6, John contracted whooping cough and from that time on he suffered with chronic bronchitis and was never without a handkerchief, but it never stopped him from doing things. As a result of this, he had part of his lung removed in 1962. In spite of all of this, he participated in many sports and enjoyed the outdoors. The family moved to Medicine Hat when John was 10 years old. After high school, John went to work on the CPR for 11 years as a steam locomotive fireman. When the railway moved from steam engines to diesel his job ceased. He then went to work for the Royal Bank of Canada in Medicine Hat for 11 years. After that time, he decided to change careers and moved to real estate for 20 years before retiring. He was honoured to have assisted so many people in the Medicine Hat area to sell or purchase their homes. John loved golf! Over the course of his playing time, John was instrumental in helping to start the Police Point Golf League along with various tournaments. What John really enjoyed the most, was camping and fishing with Alice, son, Kim and friends. John learned his fly tying skills from Walter Lawson and the two of them subsequently taught the art and science of fly tying to many others. He loved sharing this passion and seeing the excitement of a student tying their first successful fly. John was also fortunate to have had many years of salmon fishing with his brother, Harry on Vancouver Island; he loved taking his salmon home and sharing them with his friends. John and Alice loved to gather with family and friends whether it was simply for a game of cards, a great meal together or out at a campsite…. and did they ever enjoy their cards! The games would go on for hours with much laughter and fun. John had great pride in his yard and put a lot of love in tending to the flowers and shrubs in it. Everyone admired all the different varieties of flowers he grew in his backyard and he was a great source of inspiration to other gardeners. He was so looking forward to the coming spring and seeing the tulips and daffodils popping out of the ground. John will be deeply missed by his many nephews and nieces. He was predeceased by his wife, Alice and his son, Kim along with his mother, father and brother, Harry. The family would like to express their heartfelt gratitude to the doctors and nurses of the Medicine Hat Health system along with the care providers who assisted John in his last days. We would also like to express our gratitude to John’s dear neighbours and friends who took such good care of him. John’s life will be silently remembered without the proceedings of a formal funeral service. (Condolences may be expressed by visiting our website at www.cooksouth land.com) For those wishing to make a memorial donation in John’s name during this Covid-19 pandemic, the family would like to encourage everyone to give to a charity of their choice that affects those living in Medicine Hat. John loved his city. Honoured to serve the family is