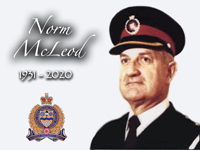 Norman ‘Norm’ Francis McLeod passed away in Medicine Hat on Tuesday, April 21, 2020. Norm was born in Medicine Hat on August 30, 1931, where he was raised and educated. In 1957, Norm joined and became a proud member of the Medicine Hat Police Department. He rose through the ranks to become Chief of Police in 1984. Shortly after Norm retired in 1986, he began a long, arduous and courageous battle with Frontotemporal Dementia (FTD). Norm was a kind and jovial person who loved his family and his community. He loved playing the ‘pipes’ and for several years prior to his illness, he was an active member of the Medicine Hat Scottish Pipe Band. Norm was also a longtime member of the Masonic Lodge, Shrine Club and the Senior Citizens Advisory Committee. While a member of the Shrine Club, Norm joined the Shrine Band and enjoyed participating, for several years, in many parades (locally and district), including the Medicine Hat Stampede Parade. Along with his beloved and devoted wife of 64 years, Shirley, Norm is survived by their three sons, Grant (Sherrie), Colin (Cindy) and David; six grandchildren, Jonathon, Jeffrey, Michael, Sandra Lynn, Amber and Leo; ten great-grandchildren, five nieces; one nephew and two sisters-in-law. Norm was predeceased by his parents, John ‘Scotty’ and Rowena McLeod; son, Ross; three brothers, Ken, Jim and Bill ‘Danny’; two sisters-in-law; one nephew; one niece as well as one great nephew. Many thanks to Dr. Ciubotaru and the nursing staff of River Ridge Senior’s Village for the excellent care given to Norm over the many years. A memorial celebration will be arranged for at a later date. If friends so desire, memorial donations in Norm’s name may be made directly to the Al Azhar Shriner’s Hospital Patient Transportation Fund, 5225-101Street NW., Calgary, AB., T3L 1S4. (Condolences may be expressed by visiting www.cooksouthland.com) Honoured to serve the family is