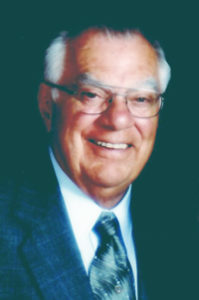 William (Bill) Anhorn was a well-known Kamloops businessman for over three decades. He was perhaps best known for his work as the founding director of KEDCo (Kamloops Economic Development Corp.) and a founding member of the Norkam Seniors Housing Cooperative, resulting in the construction of Cottonwood Manor. His keen business acumen contributed in many varied ways to the economic development of Kamloops over the years. Most notably, he and his wife Phyl owned and operated a restaurant supply franchise (Goodhost Foods), and Fortune Fabrics. Bill was also a CASE counsellor for the Federal Business Development Bank. He was proud of all his enterprises and his ability to contribute.

Bill was a member of the Kamloops North Rotary Club, the Masonic Lodge, and St. Andrew’s Lutheran Church.

He was born and raised in Medicine Hat, AB, and met his wife Phyllis there as his last-minute high school grad date. They and their children moved to Kamloops from Sudbury, ON, in 1968, after his career with Swift Canadian Company Ltd. took the family to various provinces. The family was eager to return to their western Canadian roots.

Bill and Phyl loved to travel, especially in their camper van. He was very proud of his “Germans from Russia” heritage, and self-published a book about his family’s history.

Phyllis predeceased Bill in 2009. He is survived by his three children Bernadine (Bill) Sproul, of Nelson, John Anhorn and Corrine Anhorn of Kamloops. He had seven grandchildren, and 10 great- grandchildren.

Interment will be private, and a celebration of life will be held at a later date.

Thank you to Dr. Thomasse, Pastor Lapointe, the staff of Ridgeview Lodge, and Alternatives Funeral and Cremation Services for their professionalism and care of Bill during this time.

Condolences may be expressed to the family from www.myalternatives.ca

One Condolence for “WILLIAM PAUL ANHORN”