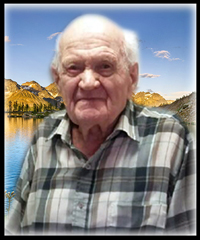 John Scheger passed away peacefully in Medicine Hat on Thursday, April 23, 2020, at the age of 93 years. He is survived by his two daughters, Inge Piche of Medicine Hat and Mary (Gilles) Scheger of Mariapolis, Manitoba; three granddaughters, Melanie (Cory) Bayer, Trudi Piche, and Kimberly Piche of Medicine Hat as well as numerous nieces and nephews. John was predeceased by his wife, Katie Scheger; parents, Franz Scheger and Aloisia Scheger of Taber; sisters, Maria Halcombe and Helen (Drago) Vuckovic of England; brother, Frank (Helen) Scheger of New York; sisters-in-law, Annie Brugger and Katie Schafer; brothers-in-law, Steve Brugger and Peter Schafer as well as his mother-in-law, Katherina Schafer of Taber. John immigrated to Canada with his parents in 1953. He spent many years farming and working at the Sugar Factory in Taber. He enjoyed fishing and was known for his love of telling jokes. John liked being out and about and always found joy in socializing and meeting new people. In his retirement, he began selling Taber corn which allowed him time to find all those things. John became known by some as the “funny corn stand guy at Leon’s who always had a good deal and a good story.” He spent most of his senior years at Legion Manor in Medicine Hat and most recently resided at The Good Samaritans long term care in Southridge Village. John will be laid to rest at the Taber Cemetery beside his wife. There will be a small family gathering at a later date to honour his life and say a final goodbye. The family wishes to thank all of the staff at the Good Samaritan Society who took exceptional care of John and to all the residents who shared his time and stories and always looked out for him. It meant more than you can ever know.

‘God looked around his garden and He found an empty place,

And then He looked down upon the earth and saw your tired face.

He put His arms around you and lifted you to rest,

God’s garden must be beautiful, He only takes the best.

He knew that you were suffering, He knew you were in pain,

He knew that you would never get well on earth again.

He saw the road was getting rough and the hills were hard to climb,

So He closed your weary eyelids and whispered “Peace be thine.”

It broke our hearts to lose you but you didn’t go alone,

For part of us went with you, the day God called you home.’

In lieu of flowers or cards, a donation may be made in John’s memory to The Good Samaritan Society, South Ridge Village, 550 Spruce Way S.E., Medicine Hat, AB., T1B 4P1 (www.gss.org) (Condolences may be expressed by visiting www.cooksouthland.com) Honoured to serve the family is