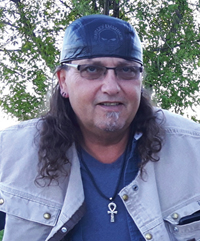 It is with shock and absolute sadness that we announce the sudden & unexpected passing of Faron Murray Ritz, husband, father, grandfather, brother, son & friend. Faron was born in Dauphin, MB the first born son to Erwin (Curly) & Mary Ritz. The young family moved to Red Deer briefly and finally settled in Medicine Hat. Faron graduated in 1980 from Crescent Heights High School, and went on to apprentice with Scott Manufacturing as a welder. Later he went on to receive his ticket through Joyline Transport. In his late 20’s Faron moved to Red Deer, AB and began his lengthy career with North West Pipe where he worked on and off again with the company up to 2018. BWS Fabrication was the other company Faron split his career time with, up to March of this year. In June of 2017 after 11 years together Faron married his forever love Oksana Katyshev in Las Vegas. Faron will forever be remembered as a hardworking, hard playing, fiercely loyal and loving family man. He is survived by his loving wife Oksana, youngest daughter Zarrah Ritz and step son Alex Katyshev. His two oldest daughters from his first marriage Dakota Ritz, Sienna Ritz, and granddaughter Kaysia Walton. Brother Leon Ritz (Paige Schneider), sister Tamala Peters (Bernard De Peiza), nieces Cersten Peters (Nick Lyons) and Brayden Peters (Derrick Cullum). Faron was predeceased by his mother Mary Ritz, and father Erwin Ritz. Due to Covid-19 the family will be having a private Celebration of life Monday, May 18, with internment to follow at a later date. Love always …….Until we meet again.