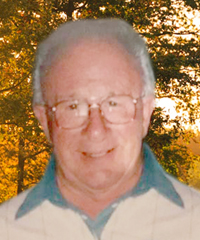 It is with great sorrow that the family announce the passing of C.J. “Larry” Bourgaize at the Riverview Care Centre, in Medicine Hat on Tuesday, May 19, 2020, at the age of 99 years. Larry is survived by his grandson, Bill (Carol) Merriman as well as his three beautiful great-granddaughters, Ashley, Courtney and Amy. He is also survived by his companion and girlfriend of 26 years, Nina Mae Dickie. Larry was predeceased by his wife, Dorothy; daughter, Frances (Tom) Merriman and grandson, Grant Merriman as well as his brothers and sisters. He was born in Guernsey in the Channel Islands, Great Britain, on August 3, 1920, to Nicholas and Mabel Bourgaize. Larry served as an Airman and Dispatch Rider for the famed #600 Squadron of the Royal Air Force during World War II. It was during his training at the S.F.T.S. #34 in Medicine Hat where he met Dorothy Muriel Browne. They were married in 1942, and Frances was born a year later. After the war, Larry made Medicine Hat home for his bride and new daughter. He worked as a truck driver for many years with Canadian Freightways as well as working for Canada Safeway and the Co-op. The family would like to thank the wonderful staff at the Riverview Long Term Care Centre where Larry lived out his final years. He will be interred at Hillside Cemetery on Monday, May 25, 2020, alongside his late wife, Dorothy. If friends so desire, memorial donations may be made in Larry’s name directly to the Alzheimer’s Society of Alberta, #201, 770 – 6 Street S.W., Medicine Hat, AB., T1A 4J6. (Condolences may be expressed by visiting our website at www.cooksouthland.com) Honoured to serve the family is

One Condolence for “C.J. ‘LARRY’ BOURGAIZE”