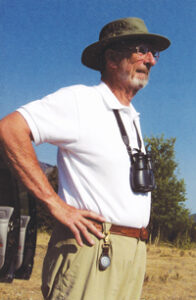 Wilbur was born in Yorkton and grew up in Moosomin, Saskatchewan. He graduated from the University Of Alberta School Of Dentistry in 1956.

After retiring as a Dental Health Officer for the Medicine Hat Health Unit, Wilbur began a second career as a Wildlife Photographer with headquarters at his beloved Wildhaven Farm. He was always an avid birder and his specialty was birds of prey. His photographs were displayed in many texts and publications, as far away as Germany, Japan and Argentina.

Wilbur is survived by Nancy, his wife of sixty years, his sister Kathleen, and his sons, Michael (Corina), Courtney (Sharon) and Anthony (Phuong) as well as his grandchildren Kendra-Lynn, Janae, Laurier, Suzanne, Samuel and Christine and step-grandsons Aaron and Jay. He was predeceased by his grandson Jaden. He is also survived by his sister-in-law Susan Underwood and her sons, (dear nephew) Nathan (Samantha) and Thomas (Jenna) and by brother-in-law Don Lancaster (Leanne) and his daughter Sara (Brian) Lancaster, nephew Daren Wahler and niece Debra Hart.

A private family gathering will be held at a later date. Those wishing to remember Wilbur may do so by making a donation to the Alberta Wilderness Association, 455 – 12 St. NW Calgary, AB T2N 1Y9.