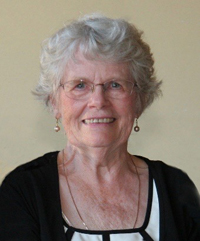 Stella Sutton passed away peacefully on March 18, 2020 at the Sherbrooke Community Centre in Saskatoon, SK. Stella Lucile Sutton was born in Sceptre, SK on the 11th of August 1930. She was the second of six children of Lawrence and Hilda Sutton. She attended Kathleen School (south of Sceptre) until it closed then finished her school at Sceptre. Stella married Orwell Sutton on July 5th 1948 in Swift Current, SK. They farmed in the Sceptre community; living on the Ralph Sutton farm for 13 years until they purchased and moved to the Roadhouse farm (just north of Sceptre) in 1961. She was a devoted wife, loving mother, great cook – paying attention to the little details when making great tasting meals and picnics on excursions to the Sandhills, Rodeos, Lemsford Park, and delivering meals to the field. She loved sewing, mending, taking care of her garden and keeping the farmyard in great shape. Stella was incredibly involved in the community. She was a member of Sceptre United Church, singing in the choir, teaching Sunday school, and assisting with C.G.I.T. (Canadian Girls in Training). She was active with Girl Guides and the Boy Scout Programs, coached ball and was a key participant in the development of the Sceptre History Book. She was an avid member of the Women’s Institute, enjoying their teas and other gatherings. One of her favourite activities was acting and directing plays in the Sceptre Hall. Stella was a wonderful supporter and motivator for her children, enabling them to often achieve more than they thought possible. She would encourage, nudge, persist, push, till they suddenly realized they actually could to what was once thought undo-able! All five of her children accomplished more in life because of this persistence! Stella always gave of herself. She was devoted to her husband, her children, her grandchildren and to her ailing parents in their time of need. She was always helping someone. Stella lost her loving, adoring husband, far sooner than she ever expected on November 18, 1979. She stayed on the family farm for a short while after, then moved to Prince Albert, SK in 1981 before relocating to Saskatoon in 1983 and remained there until her passing. In Saskatoon, Stella remained active, involved in healthcare initiatives, and community clubs. She joined square dancing, where she met Garry MacKenzie, who became an incredibly good friend and companion. Stella was also predeceased by her parents, Lawrence and Hilda (Gulliford), as well as Orwell’s parents, Ralph and Alma (Bell), one sister Shirley, one brother Ron, very sadly one grandson Trevor Sutton, good friend Garry MacKenzie plus five brothers-in-law: Jack Steier (Shirley), Mitch Philip (Doreen), Gordon Francis (Vivian), Denzil Sutton (Wilma) and Beverley Sutton (Elsie). Stella is survived by two sisters, Vivian Francis and Doreen Philip, and one brother Victor Sutton plus all of her children: Patsy (Brian) in Calgary, Joan (Heinz) in Redcliff, Russell (Carol) in Medicine Hat, Lorraine (Hugo) in Saskatoon and Glenn (Jeannine) in Sceptre as well as 10 grandchildren, 19 great-grandchildren and 2 great-great grandchildren. Stella will be laid to rest, beside Orwell, in the Sceptre Cemetery following a celebration of life at a later date. In lieu of flowers, memorial donations, may be made to the Great Sand Hills Museum in Sceptre, SK. By visiting the website greatsandhills museum.com or calling 306-623-4345. Rest in Peace. You deserve it! One super Mother, Grandmother, Great Grandmother, Great-Great Grandmother, Sister, Daughter and genuinely great lady. In our hearts and thoughts forever. Arrangements in care of Travis Minor – Mourning Glory Funeral Services (306) 978-5200 www.mourningglory.ca