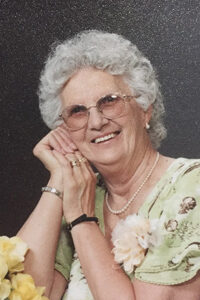 Jeannine Aline Wagner passed away on June 9th, 2020 at the age of 87 years. Jeannine is survived by and will be missed by her sons, Clint and Clay; daughter-in-law, Christie; granddaughters, Kiaya and Piper; great grandsons, Sebastian and Oliver. She is also survived by her sister, Jacqueline (Jim); brother, John (Lynn); sister-in-law, Addie; and numerous nieces and nephews. She is also survived by Doug’s close cousins, Keith (Mary) and Iva Jean. She is predeceased by her parents, Arthur and Aline; brother, David (Elizabeth); sister, Marie (Lynn); brother-in-law, Dale (Evelyn); sister-in-law, Mary and brothers-in-law, Dominick, Junior; and sisters-in-law, Tot and Norma; and brother-in-law, Stan. Jeannine was born in Sintaluta, SK to Arthur and Aline Railton. She was the third child, a sister for Marie and David. Her sister Jacqueline arrived almost three years later. Jeannine got a sister and best friend all in one. The family was completed in June of 1945 with the addition of her brother, John. When Jeannine turned six years old she went to live with her favorite aunt, Marie, and developed a driving interest to follow her into the teaching profession. She successfully completed her education at Teachers College in Moose Jaw, SK. She then taught for 34 years. Jeannine taught for three years around Sintaluta, SK, during which time an aunt started trying to be a matchmaker and pushing a gentleman as old as her father. Jeannine being the strong-willed woman that she was, went to the Superintendent and asked him to find her a new job as far away as he could. He recommended Consul, S, as he had worked down there and had a very high opinion of the town. He sent a recommendation to the school board and she was hired. She got a taste of southwest hospitality almost immediately, she arrived on the train at Shaunavon and was told she would have to wait for the train the next morning, but then the station agent said he knew a young man that was working in Consul. He contacted him and assured her that it would be more comfortable if she caught a ride with him. When they got to Consul, the young man contacted the head of the school board who directed her to Gramma Frame. Jeannine was always grateful for the ride and to be boarded with such an outstanding lady. Unknown to her, two local men, who were cousins, flipped a coin to see which one had to ask her to the dance, Doug won the toss so Harry had to ask her out. Gramma Frame assured her that they were good boys and came from good families, so she went with Harry. By the second dance it was Doug picking her up and less than a year later they were married. The first 3 years they moved several times. After the birth of their first child, Clint in December, 1959 they bought a farm at Senate. Jeannine again started teaching at Consul. She taught there for the next 30 years. In November 1962, the family was completed with the addition of Clay. There were two families in Jeannine’s life, the four of us and hundreds of students who passed through her classroom. Jeannine and Doug travelled extensively including trips to Mexico, Canadian barn dance, England and several tours with Warlin tours. After Doug had had a heart attack they moved to Medicine Hat in 1998. They bought a house on 13th Avenue, and made it their home until their passing. In honour of Jeannine’s memory donations may be made to Alzheimer Society, 201, 770 – 6th Street SW, Medicine Hat, Alberta, T1A 4J6. The celebration of Jeannine’s life will be held at a later date due to Covid restrictions. Condolences may be sent to condolences@saamis.com subject heading Jeannine Wagner. Funeral arrangements are entrusted to