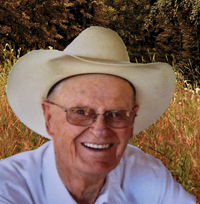 John A. (Jack) McDougald passed away at Maple Creek, Saskatchewan on May 31, 2020 at the age of 94 years. Jack was born in Maple Creek to James and Florence (Cumberland) McDougald and was raised there, along with his two younger brothers, while also spending time on the Y Bar ranch south of Maple Creek.

In 1939, at the age of 13, Jack joined the Reserve Army. That year, his unit, the 14th Canadian Light Horse, was the last unit to take horses to camp at Dundurn. In 1943 he enlisted in the Canadian Army, taking basic training at Saskatoon, Kingston, and Hamilton. World War II ended just as his unit was completing their training, so his hope to go overseas did not come to be. He remained in contact with unit comrades ever since. He was forever proud to be a member of the Royal Canadian Legion, as it was the Legion that ensured that the young soldier would complete his Grade 12 at Regina, and helped former soldiers get into agriculture.

After finishing with the army and high school, Jack returned to Maple Creek and began ranching. He was always open to innovative ideas regarding range management and cattle breeding.

Dad was forever welcoming, always meeting new people in Maple Creek and while travelling, and he loved learning and sharing. We know that Dad had a network of friends, young and old, far and wide, greater than we will ever know. The telephone kept him in touch with friends and relatives constantly. In 1954 he married Ivy Park. They ranched at the Y Bar until retiring to Maple Creek in 1987. They were active in the community. Dad rode his bike about Maple Creek for many years, and forever made a point of having a daily walk. He was a regular at the curling rink for many years. They did a good bit of travelling until Ivy passed away in 2003. Jack continued to do some traveling and spent several winters in Victoria. Music was important and there was a great variety via radio, home stereo, dances, theatre, festivals, music clubs and cafes, and internet radio.

Due to COVID-19, a private graveside service was held June 4, 2020, with the Archdeacon Peter Boote officiating. A memorial service will be held in the future as covid-19 restrictions allow. Expressions of sympathy can be e-mailed to condolences@saamis.com, subject heading Jack McDougald. Those who wish to remember Jack may do so with a gift to St. Mary the Virgin Anglican Church, c/o Mary Anne Friday, Box 353, Maple Creek, SK, S0N 1N0, or the charity of one’s choice. Funeral arrangements were entrusted to Saamis Memorial Funeral Chapel and Crematorium, Medicine Hat, Alberta.