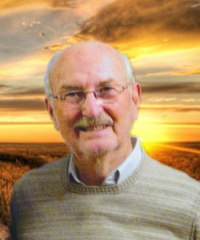 William John Dowler passed away June 22, 2020, in a sudden bout of illness at the Medicine Hat Hospital. John was born September 11, 1935, in Palmerston,Ontario. As a young man in Ontario John began his career with a paper route and delivering groceries. Always a fan of Western life John decided to head West. Searching for sweeter pastures, which if he didn’t find he made. As a young man he prospered in Southern Alberta. In between playing hockey for the Bow Island Mercury’s, the Northwest Nitros, the Medicine Hat Hot Shots, coaching minor league hockey and working his day job in irrigation; John met and married his soul mate, Maureen Knowles on September 5, 1959. Upon earning his Irrigation Technician designation, John’s career took him on many exciting adventures including life in Lethbridge, Kamloops, Oregon, Illinois and New Jersey. While in the United States, he still managed to keep his love of the ice active by coaching and playing hockey in Illinois and New Jersey. In New Jersey John changed careers joining the Vermeer company. With Vermeer, John followed behind one of the first Round Hay Balers in the fields of Iowa.

Returning to Medicine Hat in 1976, John and Maureen bought the Husky Gas & Oil franchise. From that business, he moved onto opening Triangle Equipment & Feeds – which he operated until his retirement. John truly enjoyed meeting past customers at farm and ranch events that he continued to attend in his retirement. Living in different locations gave him and his family the opportunity to discover and learn about the area’s history and make many new friends along the way.

John was passionate about Genealogy. The Dowler family tree he compiled is part of a massive genealogical family history, his research linked 16,795 people. John held executive positions in the Medicine Hat Genealogy Society and the Alberta Genealogy Society. John was heavily into Rock Hunting, he was a member of the Medicine Hat Rock & Lapidary club. John held executive positions in the Medicine Hat Rock Club, the Alberta Federation of Rockhounds and the Gem & Mineral Federation of Canada. John was an active member of the South Eastern Alberta Archaeology Society. Whether hiking or camping with the “Arky” or “Rock Club” or out with their Supper Club, John made many enduring friendships plus many “good times” with Jaycees of Canada & USA.