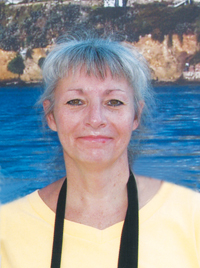 It is with profound sadness that we announce the passing of Teressa Flaig-Forczek, beloved wife of Keith Flaig, on July 9th, 2020. Teressa passed away at the age of 63 years after a short battle with cancer. She leaves to cherish her memory one sister, Angela Falez and husband, Brad of Calgary; brothers-in-law, Bruce Sunstrum of Cessford and Larry and Carma Flaig of Raymond; sister-in-law, Karen and Tim Hittel of Medicine Hat; as well as numerous nieces and nephews. She was predeceased by her parents, Walter and Jean Forczek; in-laws, Fred and Ruth Flaig; sister, Linda Sunstrum; brother, Leszek Forczek; and nephew, Dallas Sunstrum. Teressa was born in Brooks, AB on November 17th, 1956. She moved to Medicine Hat in 1975 where she was employed at the Medicine Hat Regional Hospital until 2003 when health issues forced her to retire. Teressa enjoyed travelling even though it was difficult for her. They enjoyed numerous destinations; her favourite was the many trips to visit her brother who was an artist living in California for many years until his death in May 2019. Teressa was a caring and generous person. “God Loves a cheerful giver”, 2 Corinthians 9:7. She believed in being happy to give and enjoy rewards of bringing joy to others. It seemed she always knew what someone wanted or needed. She could always make you laugh with her sarcastic sense of humour which we all fell victim to. Teressa always tried her best whenever she did anything. She always felt that if something was worth doing; it is worth doing right. She was a hard worker whether it was at work or at home, work ethics she inherited from her Dad. She spent a lot of time with her Dad when she was young at his shop, Brooks Iron Works. She would say that no matter how busy Dad was, he would shut the lathe off and spend time with her and her dog Porky. Teressa was very close to her father and it broke her heart when he passed away in 1998. She will be sadly messed by all those who knew her. The family would like to extend their heartfelt gratitude to all the doctors, nurses on 5E and EMS staff that took such great care of her and showed so much compassion and kindness in her final days. A private family graveside service will be held at a later date with Pastor Bob Church officiating. Memorial gifts in Teressa’s memory may be made to the Marjery E Yuill Cancer Centre c/o 666 5 St SW, Medicine Hat, AB T1A 4H6. Condolences may be sent through www.saamis.com or to condolences@saamis.com subject heading Teressa Flaig. Funeral arrangements are entrusted to