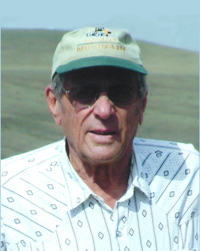 Mr. Benny Sayler passed away into glory on Saturday, July 18th, 2020 at the age of 95 years! Left to remember him with love are his two daughters; Jacquie (Paul) Noerenberg of Hilda, and Jennifer (Rudy) Schinschick of Rockyview; two grandchildren, Mark Noerenberg and Juliette Noerenberg; and numerous nieces and nephews. Benny was predeceased by his loving wife Waltraud “Wally” (nee Kern) of 59 years; as well as his parents, Jacob H. and Katharina; his brothers, Rudolph 1, Rudolph 2, Oscar, Ernest, Ted; and sisters, Emma (Herrmann), Anna Sayler, Esther (Helm) and Martha (Emann). Benny was born on the family farm near Hilda. His family and his mixed farm operation were the greatest pleasures in his life. He remained active in farm activities until his mid 80’s. He was an extremely hard worker and even in his 90’s was known to say that he so wished he could still work on the farm. Ben faithfully attended the Hilda Baptist Church. He was also active in the Hilda Community Association. He fondly remembered running the reel to reel projection system at the Hilda Hall for movie nights as a young man. He also enjoyed curling, playing pool and cards, and going to the Medicine Hat Stampede and Rodeo every year. He continued to be interested in anything to do with nature and the environment, the oil and gas industry, green energy, farming, technology, and politics. Benny semi-retired in 1998 by moving into the town of Hilda. In 2011, he and Wally moved to South County Village in Medicine Hat where he lived until his passing. Ben was most grateful for the tireless prayer support of his family and friends. The family would like to thank the devoted care workers that became Ben’s extended family in his last days. The funeral service will be held at SAAMIS MEMORIAL FUNERAL CHAPEL, #1 Dunmore Road SE, in Medicine Hat at 1:30 pm on Wednesday, July 22nd, 2020 with Pastor Steve Driedger officiating. Due to COVID-19, attendance must be limited to 100 people including staff and clergy. Those wishing to do so may watch the service via live webcast at www.saamis.com. In lieu of flowers, donations can be made to Hilda Baptist Church, Box 40, Hilda, AB or the Pinecrest Baptist Bible Camp c/o Temple Baptist Church, 606 – 7th Street SW, Medicine Hat, AB T1A 4K8 . Condolences may be sent through www.saamis.com or to condolences@saamis.com subject heading Benny Sayler. Funeral arrangements are entrusted to