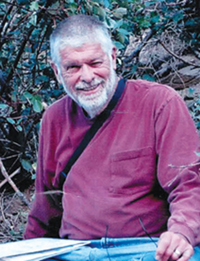 John Harry Brumley was born November 7, 1946, oldest son of James (Jim) and Betty Lou Cool Brumley, at the Scared Heart Hospital in Havre, Montana. He passed away at his home in Syracuse, Utah on July 20th. He graduated from Havre High School and attended the University of Calgary in Alberta receiving Honors B.A. in Archaeology in 1971 and a M.A. in Archaeology in 1976.

From very early on John showed a great interest in archaeology. At the age of 15 he brought the Wahkpa Chu’gn Buffalo Jump to the attention of the proper authorities. He continued his interest in this site all of his life writing several articles and booklets about its history. In 1994 John and his wife Anna, took over managing the site until 2017, when they moved to Utah.

In August of 1969 John married Laurie Milne and they had two children, Mary Elizabeth and Sarah Anne. They later divorced.

After graduation, he started his own business, Ethos Consultants Ltd in Medicine Hat, Alberta. In 1983 he married Anna Knopp Sawyer in Billings, Montana. He opened a branch office, Ethos Consultants Inc. in Havre, Montana in 1985. John lived a large amount of his adult life in Alberta. He said he thought of Alberta as much his home as the US.

John has authored or co-authored over 500 published and unpublished reports. John’s main interest was tipi rings and medicine wheels of which he wrote several technical reports on them. John always said he was very fortunate to spend his life doing something he really loved.

He shared his enthusiasm for archeology with many in Alberta and Montana. In 1975 he was instrumental in forming the Southeastern Alberta Archaeology Society in Medicine Hat, Alberta. John shared his interest in archaeology by holding workshops and involving members in actual investigations and research. He always had time to answer questions. He was very inventive both with devising ways of making site mapping and excavations more efficient as well as developing new theories that interpreted sites to reflect early peoples actual living experiences. He learned to fly so he could do aerial photographs of sites and then later invented the “photo boom” to take over head photographs from the ground and SPEED, a machine to make excavating much easier.

Summer time was spent going on field trips, mapping medicine wheels and other sites, floating various rivers including the Missouri – many good memories were made.

John loved being around his five grandchildren. He also had a love of animals and the house was always filled with an assortment of dogs and cats. He helped rescue and find homes for many of them over the years.

John is survived by his wife Anna, brother Kenneth (Pam) of Virginia, daughter Sarah Anne, grandchildren Ben, Ava, Gunnar, Sam and Baron all of Alberta, and step son Flint (Cheri) Lachenmeier of Utah. He was preceded in death by his parents and daughter Mary Elizabeth.

In lieu of flowers donations can be made to the charity of your choice.