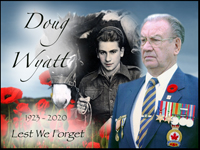 Doug Wyatt, beloved husband of the late Irene Wyatt (nee Dahlstrom), passed away peacefully at River Ridge Seniors Village in Medicine Hat on Tuesday, July 28, 2020, at the age of 96 years. Doug was born on November 6, 1923, in St. George, Bristol, England and immigrated to Canada with his    parents, Francis and Alice Wyatt when Doug was five years old where they then made Medicine Hat their home. In 1942, Doug joined the Canadian Army.  He was originally stationed at Suffield where he worked in the motor transit division and was then assigned to the 49th Regiment in Edmonton where he was sent overseas to serve as a soldier in World War II.  Doug fought in the “Battle of Ortona, Italy,” a famous hand to hand battle combat with the German Army, where he was critically wounded by artillery fire and had to be sent home.  He was honourably discharged with five service medals in 1944. Doug then started his career with the Royal Canadian Legion where he dedicated his life for 46 years.  He also participated as a drummer in the Royal Canadian Legion Pipe Band.  During that time, he met and married Irene and together they had four children. Doug was an avid sports person.  He loved hunting, fishing, biking, camping and was a life-time member of the Connaught Golf and Country Club.  Doug was a dedicated weight lifter and worked out daily with his friend, Norman. Doug is survived by his three children: Doug (Deb), Kathy (Art) and Kim (Dave); eight      grandchildren, Kelly, Sean, Jason, Jeremy, Ryan, Todd, Nicole and Brandi; fourteen great-grandchildren, two brothers, John (Louise) and Frank (Linda) as well as his brother-in-law, Irwin and sister-in-law, Marion. Doug was predeceased by his wife, Irene; recently by his eldest daughter, Penny; parents, Francis and Alice as well his siblings, Harold, Darlene (Eddie), Jack and Jacquie. It was Doug’s wish not to have a formal service.  There will be a memorial at a later date.  The family would like to say a special thank you to the staff at River Ridge Retirement Home for    treating Douglas like part of a family.  (Condolences may be expressed by visiting our website at www.cooksouthland.com)  Honoured to serve the family is