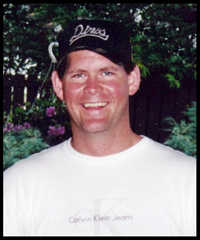 It is with heavy hearts that the family of Tyler McKenzie Rae announce his passing on September 1, 2020, after a courageous and quiet battle with cancer. Tyler was born in Missoula, Montana, and while moving to Medicine Hat as a baby, Montana always held a special place in his heart. He spent every summer ripping it up on Flathead Lake, and later, asked Kim to marry him on the family dock under the magnificent stars.

True to his last day, Tyler was a fiercely loyal and kind friend. He treasured his many lifelong friends with all his heart. The first of these were made attending Vincent Massey and Crescent Heights High schools. Later, through sports and other interests, Tyler met a few more people that remained important to him. And then, along came the Monday Night Football crew, his true brothers. He treasured the frequent laughs, debates, bantering and above all respect. Tyler’s Monday night friends shared a bond beyond football pride and in the end, walked the hard walk beside him.

At the core of Tyler’s heart was his beloved family. His foundation: Mom, Dad, Gran, friend and sister Erica. His pride and joy was the family he built with Kim, Kassidy, Kobe and Kiera. Kassidy was his hope, Kobe his rock and Kiera his light. Each of Tyler’s children has inherited a special part of him – his quick wit, his deep loyalty and his humble wisdom. His love, belief and pride in his children will live on.

Kim and Tyler were best friends. They were drawn together by mutual respect, love and commitment to family. This remains and shall forever remain.

Tyler leaves to cherish his memory: his wife of 21 years, Kim and three beautiful children, Kassidy, Kobe, and Kiera. Tyler also leaves his devoted mother, MaryEllen, his special friend and sister, Erica and family – husband Bob, Grace and Freddy Graham. He was also loved by his father-in-law, Tom; sister-in-law, Leanne and his brother-in-law, Brad (Janice, Haley, Chloe, and Brody) Herman. Tyler will also be remembered by his extended family.

He was predeceased by special people: Dad, Bill, Gran, Marian, and mother-in-law, Antonia.

A Private Celebration of Tyler’s life will be held in the coming days. (Condolences may be expressed by visiting our website at www.cooksouthland.com). Those wishing to remember Tyler may do so through a donation to the Medicine Hat College Foundation – Rattlers Athletics, 299 College Drive S.E., Medicine Hat, Alberta, T1A 3Y6. Honoured to serve the family is