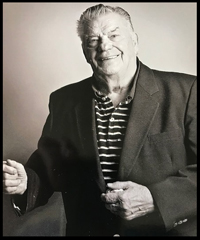 Ed Robertson, known to many of his friends as “Brooks” or “Eddy R”, passed away peacefully at his home in Medicine Hat on Tuesday, September 15, 2020, at the age of 90 years. Ed is survived by his three sons, Dale (Wendy) and their children: Janis (Trent) Biddiscomb (Brett, Justin, Dylan), Tammy (Terry) Messer (Hailey, Paige, Ashley (Brandon Leroy) and great-great-grandchildren, Nevaeh, Madilyn, Savannah, Gracyn), Jason (Amber) (Jaylynn, Dayvie, Dalmar) and Terri (Josh Tarnaski); David (Kathy) and their children, Erin and Davey (Kristy) (Bailey, Kennedy) and Darren (Misty) and their children, Lindsay and Matthew. Ed was predeceased by the love of his life, Joyce in 2001. Ed was born in Calgary, Alberta on May 10, 1930, and grew up in Yorkton, Saskatchewan with his grandparents, Pauline and Peter Stolar. He moved to Medicine Hat at age 17 and stayed with his parents, John and Grace Robertson. Ed worked at the Cecil Hotel in Medicine Hat and advanced to manager under the ownership of Calgary Breweries at the time. Through his tenure as manager, he travelled to other hotels across Alberta that were owned by Calgary Breweries as a management consultant. A new hotel was being constructed in Hay River, NWT where he was sent to oversee the construction and to manage the facility in the late 1950’s. In 1965, he left the hotel business and became a Bulk Fuel agent for Pacific 66 in Hay River. Throughout his years in Hay River, NWT, he started the Hay River News newspaper, partnered in an auction business and owned a second hand store. For over 35 years, Ed was heavily involved in the community of Hay River through the Chamber of Commerce, Winter Carnival and a number of sports associations; primarily hockey and fastball. He was instrumental in growing a national quality fastball team in Hay River with a number of his close friends and if you ever wondered where he was….you just needed to head to the ball park! Ed enjoyed life to the fullest and made countless friends and wonderful memories over the years. The family will miss him dearly and will cherish the memories he created. A private family interment will take place at a later date. Memorial donations in Ed’s name may be made directly to the Kidney Foundation, 6007 – 1 A Street S.W., Calgary, AB, T2H 0G5. (Condolences may be expressed by visiting our website at www.cooksouthland.com) Honoured to serve the family is