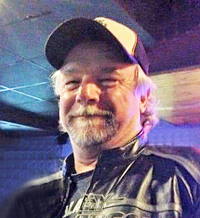 Michael “Mike” Durst of Medicine Hat, passed peacefully away on Wednesday, September 30th, 2020 at the age of 56 years. Mike leaves to cherish his memory his wife Lee Durst; two daughters, Jesse McIntyre (Chris) and Nicole Durst; grandchildren, Damon Rocheleau, Sophia McIntyre, Edan McIntyre, Rorik Brandham; brother, Werner Durst; sisters, Linda Monti, Peggy Schultz (Wally), Margo Reesor (Eric); numerous nieces, nephews and friends (to many to mention). Mike was predeceased by his parents, Adam and Frances Durst; brother, Adam Durst Jr; sister, Frances Nutz. Mike loved to go camping, fishing and ride his motorcycle (Bumblebee) but his biggest priority was his grandkids. Mike fought courageously and inspirationally against his ALS diagnosis for two and a half years, he worked so hard all his life to make sure his family never went without. “He was the best damn concrete finisher ever.” His legacy will live on in the hearts & minds of everyone he interacted with, he may be gone but will never be forgotten. A special thank you to the ALS Society for all of their support. Also to Good Samaritans Society who made the final leg of his journey more comfortable and allowed him to pass on with grace, dignity and respect. A Celebration of Life will be held at Royal Canadian Legion, Robertson Memorial Branch – Ortona Room 702-2nd Street SE, Medicine Hat, AB on October 3rd, 2020 at 2:00-4:30pm. At Mike’s request, he ask’s that everyone dress casual, the way he knew you. Memorial gifts in Mike’s name may be made to ALS Society of Alberta 7874 – 10th Street NE Calgary, AB T2E 8W1. Condolences may be sent through www.saamis.com or to condolences@saamis.com subject heading Mike Durst. Funeral arrangements are entrusted to