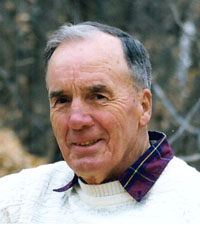 Dad was born in Toronto, ONT and spent his early years in Bruce County. He left home at an early age and worked his way across Canada until meeting mom and deciding Medicine Hat was to be their home, in the early 1950’s.

He found a job working with the Defense Research Establishment Suffield (DRES) as an electronics technician where he worked until retirement.

Despite leaving school at an early age dad was a lifelong learner and went back to get his high school diploma when the Medicine Hat College opened. He was a voracious reader, interested in a variety of subjects, ranging from mechanics to history and passed on this love of learning to his children and grandchildren.

He was a big believer in volunteering and giving back to the community. For many years you would find him at the local rinks coaching the Maple Leafs Tiny Mite hockey teams. He started up the Power Skating Program as well as sat on both the MInor Hockey and Figure Skating Associations boards.

Dad and mom belonged to the Westminster United Church and as well as singing in the church choir they took on running the High C program for a couple of years. I remember the year they managed to get a group of high school aged parishioners to perform the musical Jesus Christ Superstar for the congregation.

After dad retired he decided to leave athletics volunteering to the younger people and focused on helping various organizations, Habitat for Humanity, CNIB and Meals on Wheels to name a few. He could always be counted on to help when needed.

After he retired he bought a bike at a yard sale and it wasn’t long before he had found another passion. Before we blinked dad was on the road touring the country. East to Niagara on the Lake and back, then west to Vancouver and back, then from the south AB border to the North AB border, he cycled the breadth of the country, meeting people as he went. On training rides he would often meet other cyclists and would bring them home for a hot meal and a warm night’s sleep.

This love of bikes brought neighborhood kids to his bike shed asking him to ‘fix their bikes please.” and when his grandchildren visited he took them on bike rides. He was so happy to share his love of cycling, and, by fixing neighbourhood children’s bikes, contribute to the neighbourhood.

During his retirement wintertime would find Dad outdoors shoveling many of his neighbours’ walks as they were off at work and he liked the exercise. In more recent years, as shovelling got more difficult for him, these neighbors returned the favour for which he was very grateful.

So in honour of our dad we would like to ask that, in lieu of cards or flowers, please consider doing something kind for someone in your community.

“It’s so much darker

when a light goes out,

than it would have been

if it had never shone.”