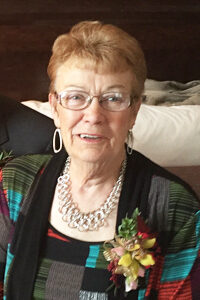 Maxine Ruby Jacksteit (Arndt), of Golden Prairie, SK passed away peacefully at home on the farm, Tuesday, October 13, 2020 at the age of 79 years.

She is survived by her loving husband of 60 years, Clifford. She also leaves to cherish her memory four sons, Eldon, Rodney (Tammy), Warren (Roxanna), Stacey (Deanna); three grandchildren, Chelsea Leismeister (Kelly), Jordan (Shay) and Leia; two great-grandchildren, Hadley Leismeister and Benjamin. Maxine is also survived by her sister, Inez Schuster and two brothers, Wayne and Curtis Arndt. She was predeceased by her parents Christian and Elsie Arndt, father and mother in-law, Dan and Bertha Jacksteit, as well as her brother Norman Arndt and sister-in-laws Ellenore Zeller and Mida Bosley.

Maxine and Clifford raised their family on the farm near Golden Prairie, SK. Maxine loved the game of curling, was an exceptional cook and always had a beautiful garden each year. Maxine was an excellent historian and never forgot a birthday or anniversary. Clifford and Maxine celebrated their 60th wedding anniversary July 22nd, 2020 surrounded by their family.

An invitational celebration of life will be held for close family and friends Saturday, October 17th, 2020 at the Golden Prairie Community Hall, officiated by Pastor Rod Nickel.

Those who wish to remember Maxine with a donation may do so to Southwest Healthcare Trust c/o Cypress Credit Union, Box 1060, Maple Creek, Sask S0N 1N0