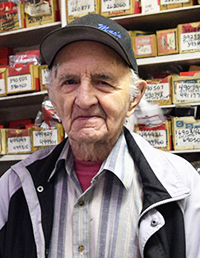 Mr. Winston Jobb, beloved husband of Helen Jobb, passed away peacefully after a short illness (and a long wait) with family at his side in the Emergency Ward of the Medicine Hat Regional Hospital on October 16, 2020, at age 95. Winston, aka “Lawnmower Man” will lovingly be remembered by his brother, the Rev. Les Jobb (Donna) of Halifax, N.S.; Winston’s son, Sheldon (Charlotte) and their children, Erin (Paul Harper) of Northern Ireland and Laura (Neil Krause) of Calgary; his daughter, Phyllis (Bruce Murray) of Bowser, B.C. and her children, Jeff Nish (Shauna) of Tahsis, B.C. and Tara Nish of Calgary. Winston is also survived by his great-grandchildren, Astrid Nish, Joel Harper, Isla Harper and Charlie Krause as well as members of his Sceptre, Sask. step-family. Also left to mourn Winston’s passing are his many nieces and nephews. Winston was predeceased by his parents, Perley and Ella; sister, Irene; brothers, Lloyd, Wendell, Layton and Sheldon who died in infancy.

Born on a small farm in Williamsdale, (Folly Mtn.) Nova Scotia, WJ’s formal education was cut short when his father got him a job at age 10 hauling logs by horse out of the bush. Thus started a long working career which lasted an amazing 84 years!! (record?) Shortly after he began another life long passion, driving, when his father somehow came to own a car but refused to drive it. He continued, driving accident free until age 92 when a certain “horse doctor” decided he was too old. This was a development father never did get past. Alas, adulthood began with Military Duty and a stint as a infantryman with the West Novas in Europe chasing the Germans back from whence they came. Highlights he would mention included the Liberation of the Netherlands and getting back home to his beloved N.S. in May 1946. Soon after he met up again with a girl from his home, the beautiful Helen. They wed in 1948, eventually settling in Debert, N.S. where Dad was working as a civilian at CFB Debert. Here he built them a lovely little home, by himself, which survives to this day with supplies he mostly scrounged; total cost $2600.

Not to spend too much time in one place, the Wild West called as Helen had a sister and brother in Redcliff. This would become home for his remaining years. It was decided he needed a trade so WJ attended NAIT, with family in tow, the winter of 1958-59, learning small-engine repair which of course became a lifelong passion as he established A1 Air Cooled Engines beginning in 1965 and eventually closing Dec 1, 2019, upon his retirement. “We came to Alberta to work, not retire” was a line he frequently repeated when his future plans were questioned. He worked for an uninterrupted run of 54 years, the last 47 of which were at the location across from the Buckle, providing a scenic view from the Overpass.

Winston was a 60 year life-member of his beloved Redcliff Legion and a founding member of the infamous Bald-Headed Society which provided service to the local community for years and gained some National notoriety (Star Weekly) in the early 1960’s. Winston rarely had a bad word to say about anyone and loved to work or better still, sit and have a beer with family and friends. At such times, he would reveal a personality which included some jokes, storytelling and a quick wit. He also had an amazing memory to the very end forgetting nothing and somehow knowing where every part was located in his amazingly organized but chaotic looking Shop. A Private service celebrating Winston’s life will be held in the coming days. (Condolences may be expressed by visiting our website at www.cooksouthland.com) Those wishing to remember Winston may do so through a donation to the Redcliff Royal Canadian Legion. Honoured to serve the family is