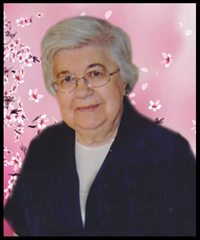 Lily Mueller, beloved wife of the late Elmer Mueller, went home to be with her Lord and Savior on Tuesday, October 20, 2020, at 93 years of age.

Lily was predeceased by her husband of 66 years, Elmer in 2018; two infant children, Sharon and Myron James; two sisters Magdelina and Herta and many cherished family and friends.

Lily was born in Wygoda (Friedensheim) near Odessa, Ukraine (then USSR) on January 31, 1927. At a young age, her family relocated to Yerevan, Armenia where she lost both her mother and father. She was then raised by her grandmother and older sister. They went back to Odessa, and then spent a brief time in Poland and Ulm, Germany during WW II. After the war she worked for a furrier. As a young girl she learned to speak German, Russian, and Armenian.

In 1948, with the help of an aunt and uncle’s sponsorship, Lily immigrated to Canada, eventually residing in Calgary. She married Elmer Mueller in Calgary on December 8, 1951. They spent much of their lives farming in the Horsham, Saskatchewan area. In 1977, Lily and Elmer moved to Medicine Hat where Lily worked at Stone Furs for a number of years.

The favourite place for Lily was to be at home with her family. She also loved to garden, plant flowers and go to the mountains.

At an early age, Lily’s grandparents taught her about Jesus. Church, worship and reading the Bible were very important to her and she passed this down to her children.

A private service will be held in Medicine Hat on Monday, October 26, 2020. (Condolences may be expressed by visiting www.cooksouthland.com). Honoured to serve the family is