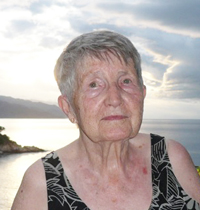 Dorothy Smith left her family broken hearted as she passed away on October 25, 2020 with her family by her side. She was born June 11, 1928 in Whitewood, SK to Lexie and Fraser Robertson. Dorothy was their middle child. Her childhood years were spent in Whitewood, SK. In 1946 she moved to Cereal, AB where she worked at the Cereal Hospital. While working in Cereal she met the love of her life Goldwin Smith. They were married in Drumheller on October 16, 1947. In 1949, they started adding children to their family. Six of the children started their lives on the family farm in Cereal under Dorothy’s watchful eye. In 1965, they moved to Irvine, AB where their family was completed with their final child. Dorothy and Goldie always made sure there was room in their house for any family or friends who happened to need a place to sleep or eat. As her family got older Dorothy returned to the workforce. Dorothy worked at Sunnyside Nursing Home in Medicine Hat from 1970 to 1979 and Weidemann’s General Store in Irvine from 1979 until her retirement. Upon retiring Goldie and Dorothy fixed up a camper and loaded it on their 1987 Dodge 4 x 4 and drove the Alaska highway, enjoying many stops and sights along the way. They also enjoyed trips to Mexico. In December 1995 they sold their family home in Irvine and moved to Grandview Village in Medicine Hat, AB. In January 1996 her world changed when Goldie passed away. After Goldie’s passing Dorothy continued to enjoy many trips to Mexico and went on two Alaskan cruises with her family. In the winter of 2016, Dorothy made her final trip to Mexico. In February 2018 she moved to Masterpiece Southland Meadows. In June of 2018 we celebrated her 90th birthday with many family and friends in attendance. Her family was completed with seven children, eighteen grandchildren and twenty-three great grandchildren. Terry and Sharon Smith – Troy Smith (Taylor, Kyla and their mom Shantele), Jodi Smith (Hailey Smith, Colt Degenstein and Dakota Degenstein); Barb and Brett Gaff – Renee Gaff (Dakota Gaff and Ryder Wasilow), Bodie Gaff; Judy and Ron Brookes – Brad and Mary Brookes (Ronan and Bridget) Lyle and Kelsey Brookes (Lauren, Brent, Finna and Eli); Heather and Ross Beierbach – Ryan and Tania Beierbach (Rana, Lara and Jace), William and Donna Beierbach (Tate and Kate) Mona Beierbach (Georgia Howe and Hayes Howe); Doug and Jeanette Smith – Taryn (Courtney) Countryman (Case) and Jadyn (Ryan) Smith; Trish and Blaine Lanz – Boyd Lanz (Nathaniel) and Micheal Lanz; Karen and Doug Shwetz – Jimmy and Stephanie Fieldberg, Allen and Nicole Fieldberg (Avery) and Mark Fieldberg, Ashley Shwetz and Spencer Shwetz.

Also survived by her sisters, Jane Fafard and Beth (Bob) Courchene; brother-in-law, Don (Karen) Fockler and sister-in-law, Jean Smith and numerous nieces and nephews. She was predeceased by her husband of 48 years Goldwin; sister, Joan; brother, Donald; brothers-in-law, George Fafard and Ward Smith. Dorothy lived for her family. Her greatest pride and joy was helping her children grow into adults with children of their own. She was blessed to watch her grandchildren do the same and treasured each moment of joy they brought her. Our family would love to thank the staff at Masterpiece for being there for her. Special thank you to Shelley Brooks for her outstanding friendship to our mom. Due to Covid-19 restrictions we regret that Dorothy’s celebration will be private family, Live streaming of the service can be found on the Saamis Memorial Site on October 31, 2020 starting at 1:55 p.m. In lieu of flowers donations may be made to the Multiple Sclerosis Society of Canada 101 – 1201 Kingsway Avenue SE Medicine Hat, AB T1A 2Y2. Condolences may be sent through www.saamis.com or to condolences@saamis.com subject heading Dorothy Smith. Funeral arrangements are entrusted to