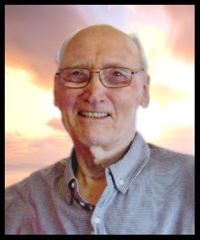 Fred was born in Moose Jaw, Saskatchewan on March 27, 1925 and was raised in Mankota, Saskatchewan. He was the eldest in a family of nine. Wander lust beset him at the young age of sixteen. He left home on his horse, which he sold in Swift Current, hitched a ride to Calgary and rode the rails to B.C. where he would work on ranches and in lumber camps. He traveled back and forth to the prairies that way a few times. As luck would have it he met a lovely young lady named Berta at a St. Patrick’s Day dance in Merritt, B.C. After going back to Regina to take a barber’s course, he sent her a letter saying he was coming back for her… and so began the love of a lifetime. They married in Kamloops B.C. October 10, 1948 and just celebrated their 72nd anniversary this year. In the course of their marriage they would move 25 times… always happy, making new friends and raising a good family. He owned his own barbershops in Smithers, Moose Jaw and Regina over the years. In later years, he became a Saskatchewan Wheat Pool elevator agent at Gibbs, Denzil, Hearts Hill and Pinkham. He retired to Alsask for a couple of years and eventually moved to Medicine Hat in 1992… first a house, then a condo and finally Masterpiece Independent Assisted Living.

Fred’s last name was very apt for he was an excellent gardener. Everywhere they moved a beautiful garden and grounds were created. He loved to do pencil sketches and excelled at wood carvings: boots, skates, animals, birds, fish and jewelry. In fact, his carved figure skates made it around the world through Skate Canada and his hockey skates through the World Juniors. Another of his talents was baking bread and buns well into his nineties. All the family and friends enjoyed his gift of homemade bread! He loved doing puzzles, watching baseball, curling and of course the Saskatchewan Roughriders. Animals, especially dogs and horses, were always drawn to him as were his young grands and great-grands who he teased endlessly and they always came back for more.

Fred will be remembered for his smile, his wit, being a kind and loving family man and always a gentleman. He will be dearly missed by all who knew him.

A family celebration of his life will be held in the spring of 2021. If friends and family so desire, memorial donations in Fred’s name may be made to HALO, 12, 49 Viscount Avenue S.W., Medicine Hat, AB., T1Aâ€ˆ5G4 or to the Alzheimers Society of Alberta, #201, 770 – 6 Street S.W., Medicine Hat,â€ˆAB., T1A 4J6. (Condolences may be expressed by visiting our website at www.cooksouthland.com) Honoured to serve the family is