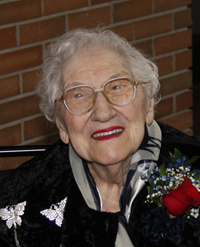 With great sadness, we announce that Evelyn Stall, 101, of Medicine Hat Alberta has passed away on Dec 6, 2020. Evelyn was born as, Eva Schwartz on Jan 15, 1919 to parents, Ben and Rose (Beckerman) Schwartz, who arrived from Winnipeg to start a new life together homesteading in Spring Valley SK. Ben had arrived young and penniless from Russia in 1912 with nothing but hope in Canada. The family moved in 1921 to Moose Jaw SK, where Ben set up a scrap metal business, an essential service in Moose Jaw during WW2. During the difficult Depression he supported his family by shoveling coal at 25¢/hr. Evelyn was joined in the family by sister Lillian and brothers, Maurice and Sam. Her interests at an early age were piano, vocal, and volunteering, and their family home at 606 Athabasca St West became an active hub of activity. Evelyn always had remained very active in the Moose Jaw Jewish community, in Hadassah and many fundraising activities. There she married Joel Stall in 1938, was blessed with three sons, and strongly continued her efforts in many support organizations. She worked as a realtor, becoming president of the Real Estate Association, and starting a new fabric business. She stayed active in civic and provincial politics, never hesitating to tell fellow Moose Jaw native Premier Ross Thatcher what was on her mind (or tell anyone else). Evelyn retired to Medicine Hat in 1981, where her parents, brother and his family resided and had operated the Frontier Motel 1956 – 1971. She always remained active in many volunteer organizations, and especially was involved in the hospital and transit commission. She received numerous awards and accolades for her efforts, with the highlight being a wonderful 100th birthday celebration held in May 2019 at the Lodge, kindly organized by Ken Sauer, Colleen Wilson and Mike Hertz. There she stated her objective was to reach one-hundred-and a half, which as always she surpassed. She was instrumental in fundraising for the Medicine Hat Volunteer Center opened in 2000. In 2002 she was a recipient of the Stars of Alberta Volunteer Award. In 2006, at age 87 she received a Civic Recognition Award from Medicine Hat after giving 25,000 volunteer hours. All who worked with her knew that she had incredible drive and determination, organizing volunteer luncheons and fundraising events well into her 90’s. Evelyn was predeceased by her husband, Joel (1962); mother, Rose (1985); father, Ben (1987); brother, Maurice (2003); and sister, Lillian (2020). She is remembered always by her three sons, Lionel of Calgary, Morley of Whistler BC, Alan (Carol) of Naperville IL; brother, Sam of Naples FL; sister-in-law, Sally of Calgary as well as six grandchildren, Jeffrey, Jennifer, Timothy, Michael, Sarah and Thomas; ten great grand-children, Natalie, Nathan, Olivia, Blake, Charlotte, Alison, David, Benjamin, Amalie and Claire; many wonderful nieces, nephews, cousins and other extended family in Canada and the USA and many friends in Moose Jaw and Medicine Hat. Services are private. The family thanks and greatly appreciates the help and support provided to Mother by the Wellington and River Ridge Senior’s homes, and her wonderful friend and caregiver Verdene Denton, who was a great comfort during these last difficult days. If anyone would like to make a donation in memory of Evelyn, please give to the Medicine Hat and District Health Foundation: https://www.ourhealthfoundation.ca/, Medicine Hat & District Health Foundation 666 – 5th Street SW Medicine Hat, Alberta T1A 4H6. Condolences may be sent to condolences@saamis.com subject heading Evelyn Stall. Funeral arrangements by